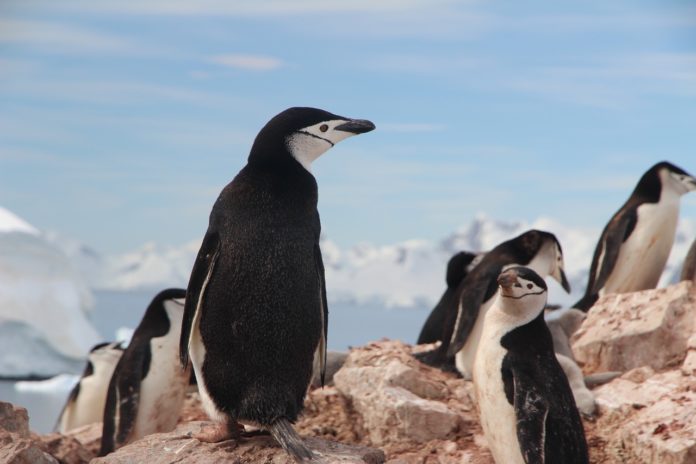 New research published last month in the journal Polar Biology suggests that courtesy of global warming, the population of chinstrap penguins (Pygoscelis antarctica) is on a steady decline with more than a third of their colony gone over the course of the past 20 years.

Researcher Andres Barbosa and his colleagues counted the chinstrap penguins in 1991-92 and 2008-09 in the Vapour Colony of Deception Island, in the Antarctic’s South Shetland Islands by photographing nests in 19 subcolonies. Their results found that nest populations had declined in the 17 year window from 1991 to 2008.

These findings were surprising as Barbosa shared that back in the ’90s it was speculated that climate change would benefit the chinstrap penguin, whose population increased, since the species favored sea waters without ice. Barbosa told Live Science that “in the ’90s it was thought that the climate change would favor the chinstrap penguin, because this species prefers sea waters without ice, unlike the Adélie penguin, which prefers the ice pack.” But the findings of his research proved otherwise.

The ultimate root cause, according to the researchers, is global warming which has caused the sea ice in Antartica to melt and in turn, has depleted the primary food source of the chinstraps’. Specifically, chinstraps’ consume a shrimp-like creature called krill which consumes algae that attaches to sea ice. With melting sea ice comes less algae, and with less algae comes less krill and with less krill comes less food for the penguins.

The idea that krill population is responsible for the decline is supported by looking into the populations of other penguin species. The Antarctic Peninsula is inhabited with three pygoscelid species of penguins: the chinstrap, the gentoo and the Adélie penguins. Of the three species, only the chinstrap and Adélie penguin population are showing a decline–and both species rely on krill for sustenance.

And while it may be tempting to blame tourism for the species decline, a quick look at the tourism data and penguin population can prove otherwise. Deception Island, which gets close to 25,000 visitors a year according to the International Association of Antartica Tour Operators, showed a decline of 36 percent. If tourism was responsible, then the chinstrap penguin colony of Bailey Head should have seen a smaller decline since Bailey Head only sees 2,000 – 3,5000 visitors a year. However, the Bailey Head population declined by 50 percent, thus proving tourism is not a culprit.

Barbosa suggests that in order to save the chinstrap penguins, there needs to be a reduction in human impact by reducing overfishing, tourism and even research activity.  He told Live Science:

“This is an example of how the human activity far from the poles can affect the life at thousands of kilometers far from our homes. Therefore, a more responsible use of the energy and the fossil fuels is necessary to preserve the planet and then the Antarctica.”