Greener IdealHelping you live sustainably
More
Home News Animals Aboriginal whale hunting: does it make a difference to the whale?

Considering many scientists who’ve worked closely with cetaceans are advocating that they receive similar rights to life that we reserve only for people because of their advanced cognition and empathy capabilities, it seems that allowing any whales, dolphins or the like to be killed should be considered murder.

But the International Whaling Commission (IWC), the international body that imposed the 1986 whale hunting moratorium, still allows something called aboriginal subsistence hunting to go on legally, which is responsible for more than 8,000 whales killed since that year.

Thanks to efforts of the Sea Shepherd and their notoriety on Animal Planet’s Whale Wars we all know that the IWC also allows Japan, probably cetaceans’ worst national enemy, to take about 1,000 whales a year for “scientific purposes.” Everyone knows that’s wrong. But the hunting of whales and dolphins by people who claim they need whales to die for them to live is something very few are willing to speak out publicly against.

And there’s good reason. The Alaskan Eskimos have been hunting bowhead whales for thousands of years and when they kill them, they actually eat all the meat and use the rest of the whale. This seems in the spirit of what aboriginal subsistence hunting should mean. I still believe to look at it objectively we should ask ourselves if they were killing and eating people for subsistence we would probably get involved to stop it immediately and force them to find an alternative source of nutrition or we would provide it for them. Since we know cetaceans are as aware as us, we can make that comparison. 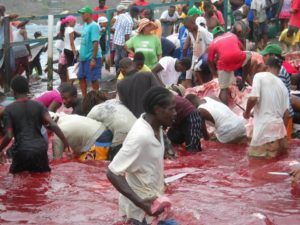 Still, if I were to picture true (or as true as it can be this deep into the throes of civilization) subsistence hunting, I would think of the Eskimos. But the photo of an orca harpooned off the coast of St. Vincent and the Grenadines, and another of a knife-wielding melee of people attacking the carcass of a Humpback whale waist-deep in scarlet sea water on the same island confused me (among other things). How was this allowed?

It seems that this island nation is allowed four humpback whale kills a year under the IWC’s aboriginal subsistence hunting exception. Seeing as the native aboriginal people of all the West Indies were exterminated soon after Europeans began colonizing the islands, this exemption is difficult to understand.

According to the West Indian Wildlife Conservation Society, the Japanese have provided St. Vincent and the Grenadines harpoon guns and membership in the IWC in exchange for votes supporting Japan’s whaling industry. The society also alleges that hunters have been targeting mothers and calves in speed boats when the IWC’s rules state that traditional methods using hand-thrown harpoons on small sailboats must be employed.

At the end of the month, the IWC will conduct another meeting where it sets whaling quotas for the next six years for aboriginal and scientific purposes. Quotas for bowhead, gray, fin, minke and humpback whales, to be hunted by groups from the United States, Greenland, Russia, St. Vincent and The Grenadines, are up for renewal under the aboriginal subsistence exemption.

Many of these hunts in all countries claiming aboriginal exemptions are conducted using high-powered rifles and motor boats. If these groups want to use tradition as an excuse, than they should at least be making a show that they are using traditional methods.

But the lack of awareness of respect for cetaceans in St. Vincent and The Grenadines is horrifying. The American Cetacean Society reports that pilot whales are hunted weekly, and the orca in the banner photo is the second or third. As a beautiful tropical country it seems that they don’t have the same need for whale meat as Eskimos who live in sub-zero temperatures for much of the year.

The IWC will meet soon. The United States is no longer a leader in progressing toward a more just world by protecting those who can’t speak for themselves and who are persecuted. Dead whales are our penance for the mistreatment of the Native Americans by our European ancestors.

Many South American countries are now taking the lead in proposing a whale sanctuary in the South Atlantic and South Pacific, essentially making the entire continent’s waters a no-kill zone.

I see nothing worthwhile in preserving the slaughter of the humpback whale in St. Vincent. If anything, it seems a detriment to a compassionate culture. If more people were aware of what goes on in this country, maybe tourism would suffer and whales would be worth more alive than dead.

Perhaps Tim Zimmermann said it best on his blog. A point that must be kept in mind as we judge from the riches of the First World is that “the slaughterhouse and industrial farming practices that produce the meat eaten by many who are outraged by whale hunting, are equally cruel and barbaric. So there is an issue of moral consistency that needs to be addressed, as well.”

Related:
What Would MLK Be Working for Today?