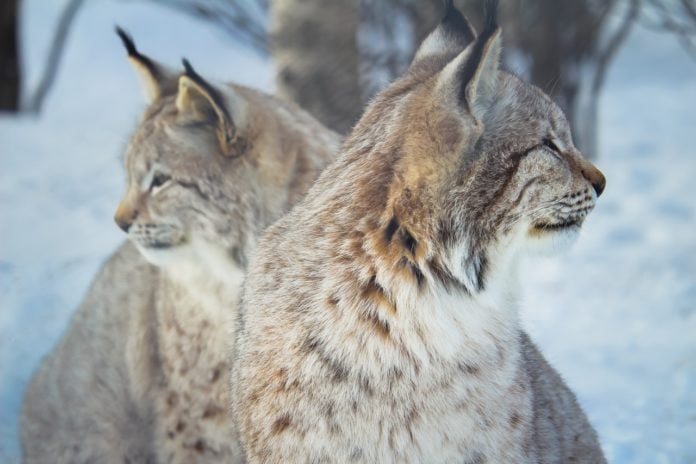 When the lowest form of predators start threatening to leave the state we know we’re doing something right.

The Bobcat Protection Act of 2013 is meant to keep one species of the state’s few remaining mega-fauna from going the way of the California jaguar, wolf and our very own state animal, the grizzly bear, by creating safe zones around national parks and forests where trapping these animals would be prohibited.

The bill, AB 1213, introduced by Assembly Member Richard Bloom (D-Santa Monica), comes at the heels of outrage in the tiny community of Joshua Tree after the area’s local bobcats began disappearing and a trap was found on private property bordering Joshua Tree National Forest.

That trap was found by landowner and conservationist Tom O’Key who took his story to the local paper and Sheriff’s station.

Then the pieces of the puzzle began fitting together.

Kreuter had been keeping detailed notes on the eight resident bobcats that returned to her property for the last 10 years. After hunting and trapping season ended this year, only one was left standing.

O’Key’s trespasser was identified as active-duty marine out of Twentynine Palms Marine Corps Base Nathan Brock, who told the local paper he’d caught five bobcats in one night after setting 30 traps in the area.

And Brock’s motive for the slaughter aside from the fact that he admittedly enjoys it? Skyrocketing prices for desert bobcat pelts that can fetch upwards of $700 a piece in markets ravenous for cruel fashion, namely, China.

But let’s not make poor Brock out to be the bad guy.

According to the manufacturer of the infamous trap, Mercer Lawing of Barstow, trappers love the animals they torture and kill way more than any of us could ever understand.

“We love those animals more than the people who are complaining about us trapping them do,” Lawing told the L.A. Times. “Nathan and I harvest adult male cats and turn loose adult females and kittens.”

I guess city folk just don’t understand the true meaning of love. I imagine it’s the kind of love serial killer John Wayne Gacy must have had for his victims – he targeted only males too.

There’s just not much reasoning you can do with people (I use the term loosely) who really believe they love the beings they bludgeon, strangle or shoot to death.

If reasoning’s out, at least we can laugh at all the strikingly ridiculous things they say as we pass laws that reflect modern society’s rejection of indulgent violence.

Lawing, who also represents the California Trappers Association, told California Report that the big meanie bobcat supporters are making trappers out to be the bad guys, when their only crime is wanting to “hold on to California’s rural heritage.”

International opinion of the people responsible for shipping Africa’s dwindling wildlife piecemeal to China is pretty low. Do these bobcat killers really want us to believe they’re some kind of patriots?

Progress requires objectively picking apart our culture’s values and behavior in order to build on what reflects our evolved ideals and to bury what stymies our development toward that better world.

Violence and killing just for the fun of it do not reflect the minimum standards of decency we expect from humans these days.

As of now, trappers are legally entitled to “harvest” as many bobcats as they can catch. There is no legal limit on the amount of traps they are allowed to set, or on the amount of cats they can skin and ship off to China. And, they are allowed to do it all on the edges of the invisible boundaries of the only safe places bobcats (and much of our remaining wildlife) have left.

Back in the late 1970s, federal law established that California’s bobcat population could be decimated by 14,400 animals each year based on Mickey Mouse population estimates that were challenged in court by Defenders of Wildlife, according to a stellar KCET article Why California Should Ban Bobcat Trapping.

A judge agreed in 1982 and told the U.S. Fish and Wildlife Service (FWS) that bobcats could not be hunted until the service could present a scientifically valid estimate of the species in California in order to set hunting and trapping quotas at a number that would, in theory, not create another endangered species.

No effort was made to pursue science, and changes to the Endangered Species Act allowed the FWS to re-allow bobcat hunting and trapping. Just for good measure, the FWS decided to reinstate the 14,400 limit despite the fact that it was legally proven to be a fairytale number.

So we really don’t have any idea how many bobcats are in California, and we are letting trappers wipe out as many cats as they can amass because we’re just assuming they are not endangered.

I wonder how an animal becomes endangered anyway?

Again and again animal serial killers defend their choice of victim because it is not an endangered species. But we’re smarter than that, right? I mean, all those species of animals now hanging on by a thread were once a favorite target of that special kind of love only a hunter/trapper can give.

But “hey, the wildlife exists for all citizens to use and enjoy in this state,” Lawing told California Report.

Use up would be the better term. Taking a shot with my camera doesn’t mean another citizen is deprived of enjoying that animal. Killing it means selling out California’s priceless natural heritage to the Chinese. (I guess the trade-off is we get to keep our rural heritage. Yipee.)

The best thing this guy said was that “trappers are being pushed out of the state. He said some already are talking about moving because of the bobcat-trapping bill.”

Let’s make California the Great Un-Hunting Experiment. No hunting, no trapping, no nothing.

We’ll see just how our wildlife – who will still face all the other pressures of pollution and habitat loss – fares without the added strain of blood-thirsty sub-humans running loose through our last remaining wild lands armed to the teeth with lead ammo, traps, scent sprays and clubs.

Give it a few years. I have a feeling these assholes will be begging to come back.

Until then, the Bobcat Protection Act is a good start.