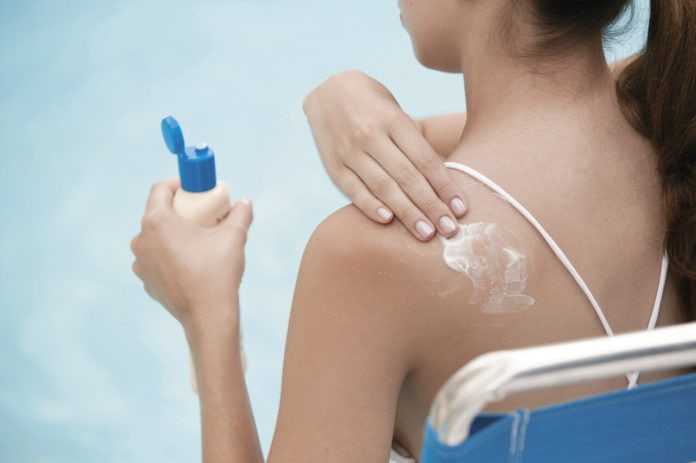 Sunscreen is known as a household product that absorbs ultraviolet (UV) radiation from the sun and protects our skin, but if what new scientific research suggests is true, then sunscreen could also be a solution for counteracting global warming. According to chemical engineer Peter Davidson, the key ingredient that could battle global warming is titanium dioxide – a naturally occurring oxide of titanium. More specifically, titanium dioxide  is an ingredient used in almost all types of sunscreen because of its resistance to discoloration under UV light and due to its ability to absorb UV light.

The enterprising geoengineering project suggests that high-altitude balloons flying 12 miles high should be pumped with millions of tons of titanium dioxide via flexible pipes, which would then be spread throughout the Earth’s upper atmosphere with a “hypersonic nozzle.” The idea is that after being dispersed throughout the planet, the particles of titanium dioxide would reflect some of the sun’s rays back into space and thereby, counteract global warming. To ensure the safety of the balloons, they would be launched from ships and islands near the equator where storms are not frequent.

While this ambitious idea sounds like it would make sense, it does raise one crucial question: How much titanium dioxide would be required to thoroughly counteract climate change? Project leader Davidson told National Geographic that “about three million tons of titanium dioxide—spread into a layer around a millionth of a millimeter thick—would be enough to offset the warming effects caused by a doubling of today’s atmospheric carbon dioxide levels.”

Such a high-tech plan comes with a hefty price tag: Estimates say the balloon system alone would cost anywhere from 800 million to 950 million USD a year, and the titanium dioxide would cost 2 to 3 billion USD each year. But that’s a small price to pay to save the future of our planet, endangered species and weather.

Odds are that this master balloon plan won’t be implemented for years – Davidson discloses that if approved, it could take several decades to be implemented, rightfully so. Before dispersing particles in our atmosphere it’s important to see what kind of results and side effects we could see. After all, what if this method does more damage than good? Rob Jackson, an environmental scientist at Duke University in North Carolina, has pointed out that “anytime we’ve injected chemicals into the atmosphere, we’ve been surprised by the chemistry that results.”

Jackson also warns that a seemingly “quick fix” for global warming may be counterintuitive as companies and people could become more irresponsible with global warming and not take preventative measures. Says Jackson:

“If policy makers see an easy fix, they might be less likely to do the hard work. I don’t want to see us whitewash this problem, and I think that’s what this scheme could do.”

While I like the idea of knowing that should push come to shove we could have  way to counteract global warming, something just doesn’t set right about spreading our atmosphere with a chemical. Why not work on eliminating the source of the problem (in this case, eliminating greenhouse gas emissions) instead of counteracting the problem itself?