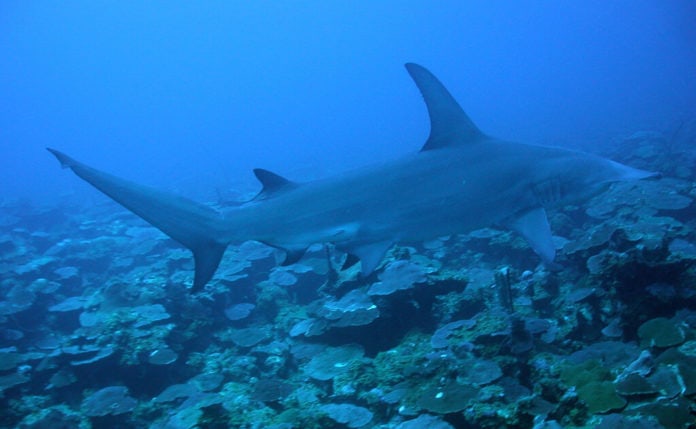 A study led by Andrés Cisneros-Montemayor, a Ph.D. candidate in the fisheries economics research unit at the University of British Columbia (UBC) in Canada, found that sharks are worth more alive than dead.

How? Shark ecotourism brings in an estimated $314 million annually worldwide and this value can double over the next 20 years. In comparison, dead sharks generate $630 million per year, but that value has been declining for the past ten to fifteen years and will continue declining with shark populations plummeting.

While the media reported 12 shark deaths, according to National Geographic, in 2011, a new report published in the journal Marine Policy estimates that each year humans are responsible for killing 100 million sharks.

Now, since this is just an estimation, the report points out that the real figure could range from 63 million to 273 million—numbers that will inevitably lead to the endangerment, if not extinction, of many species of sharks. If these numbers sound ridiculous to you, then consider this: The International Union for Conservation of Nature released a report in 2009 that revealed that more than 30 percent of species of sharks and rays are threatened species.

“Despite mounting threats, sharks remain virtually unprotected on the high seas,” said Sonja Fordham, the deputy chair of the IUCN Shark Specialist Group and policy director for the Shark Alliance, in statement released in 2009 by the organization. “The vulnerability and lengthy migrations of most open ocean sharks mean they need coordinated, international conservation plans. Our report documents serious overfishing of these species, in national and international waters, and demonstrates a clear need for immediate actionon a global scale.”

Not convinced? Consider this: A population survey of Great Whites near the Farallon Islands off centralCalifornia and Guadalupe Island off Baja, conducted in 2011 and 2012, have led scientists to believe that the West Coast population is genetically distinct. Other great white sharks exists in Australia, South Africa,New Zealand, and in the Atlantic—but these particular shark number at several thousand. Even then, Australia and South Africa have listed their great whites as endangered, according to Shester, and the shark, as a whole, is listed as a vulnerable species by the International Union for Conservation of Nature.

Needless to say, killing 100 million sharks is not self defense. Rather, the cause behind all this is overfishing. Many sharks are killed for shark fin soup, a delicacy in Asian countries that is (rightfully) becoming morecontroversial since those looking for fins catch a shark, remove the fins, and dump the animal back into the sea to drown to death.