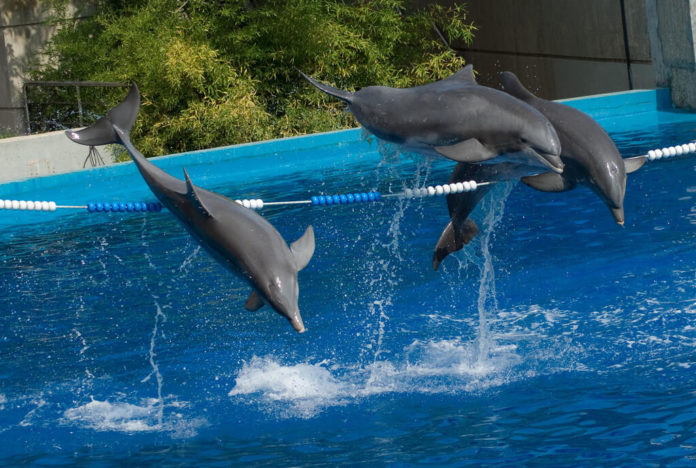 Citing tireless scientific research that has forced scientists to conclude that cetaceans – dolphins, whales and porpoises – rival our own species in terms of intelligence, self consciousness and culture, the Indian Ministry of the Environment and Forests released a statement advising state governments to reject any proposals for establishing dolphinariums.

The Declaration of Rights for Cetaceans, signed by ethicists and the world’s leading dolphin and whale researchers, calls for cetaceans to be considered “non-human people” and says they should have the right to life, freedom and not to be considered property.

India has embraced the call for a widening of the narrow designation of beings deserving of life, liberty and happiness beyond that of only humans.

It tops the list as the most important country to ban for-profit slavery of its national animal, joining Costa Rica (where sport hunting and wild animals in circuses are also banned ), Hungary and Chile.

As a top tourist destination which could stand to rake in hefty fees for swim-with-dolphins-type tourist attractions, India intends to make a statement that we need to start making serious adjustments to our relationships with the rest of the non-human people in our world if we have any intention of living up to the created-in-God’s-image ego we have inflated ourselves with.

“This is a huge win for dolphins,” former dolphin trainer and current director of Earth Island Institute’s Dolphin Project, Ric O’Barry said. “Not only has the Indian government spoken out against cruelty, they have contributed to an emerging and vital dialogue about the ways we think about dolphins – as thinking, feeling beings rather than pieces of property to make money off of.”

And a good number of unthinking, unfeeling beings are living the good life off the misery of these beautiful creatures.

There are more than 500 dolphins, orcas and other cetaceans being held in small, sterile, cement enclosures in the United States, according to Born Free USA.

And these are the “lucky” ones. Many of the captive dolphins around the world are refugees from the infamous dolphin slaughter exposed in the Oscar award-winning documentary, The Cove.

Amid the chaos of the slaughter, as family members are drug one-by-one under the tarp to be stabbed to death, young dolphins with no blemishes are selected by dolphin trainers – who have paid up to $300,000 each – and plucked out of the blood-red water of the cove to live out the rest of their often unnaturally short lives as property whose only purpose is to entertain tourists, amassing no more worth than a roller coaster.

It’s easy to understand why those making about $125 a pop for one 30-minute swim with non-human people who can’t complain or escape would be motivated to take part in such obvious injustice, but the millions of people who patronize the Sea Worlds of the world are the most frustrating mystery.

Our minds give little resistance against something we want to believe, something that enables a certain desired behavior, in this case, allowing slaves to entertain us and our children.

Related:   China joined with India in giving qualified approval for climate accord

Our greatest historical flaw – as far as animals might rank it – is our lack of imagination.

Are we so conditioned to seeing animals confined and unhappy that we can’t imagine that cetaceans who can swim hundreds of miles a day, live in family groups their whole lives that care for other injured and elderly members and spend only 20 percent of their time at the surface of the sea could not possibly be overjoyed to be torn from their families and the ocean and made to do tricks for food?

The only “education” these venues provide is a suspension of imagination.

Where imagination lacks, so follows empathy, ensuring little hope for the kind of world we all pretend to really want.

India has its flaws, but when big decisions are made in the name of protecting the innocent that challenge our maniac obsession with making money, we know we’re on the right track to shaping that world we are so painfully capable of building.

For more information on dolphins in captivity and the slaughter in Taiji, check out Save Japan Dolphins, a project of the Earth Island Institute.