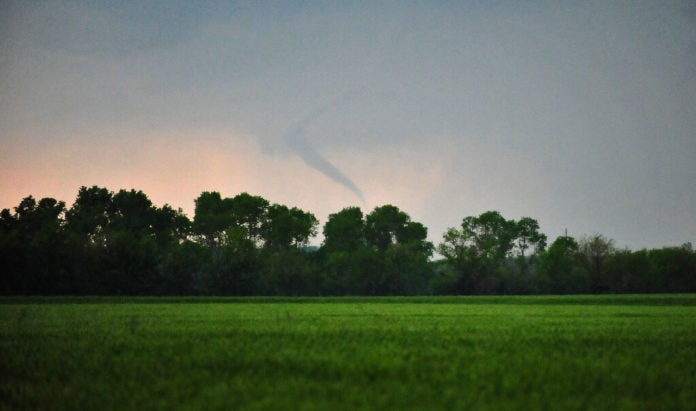 After the devastating tornado in Oklahoma, Democratic senator Sheldon Whitehouse gave a speech about global warming and the Oklahoma tornado. The conservative media, not surprisingly, called Whitehouse out on his words.

Politics aside, it does raise a question on whether global climate change is responsible for natural disasters. We’ve previously reported that data shows that the quantity of rain or snow that falls in the top one percent of the heaviest storms has risen nearly 20 percent.

The scientists with The Union of Concerned Scientists have shared an informative breakdown on the correlation between the winter storm and the planet’s changing climate. And their verdict, is clear:

UCS climate scientist Brenda Ekwurzel explains, in an emailed statement to The Huffington Post, that:

Rising ocean surface temperatures already have increased the temperature and moisture content of the air passing over the United States, setting the stage for heavier snow and rain storms. Global warming has increased the risk of dumping heavier precipitation — as rain or snow — over most land regions that experience storms.In the U.S., the region that has experienced the highest increase in heaviest precipitation is the Northeast over the last half century. According to NOAA, the Northeast saw a 74 percent increase in the amount of precipitation that fell during the heaviest rain and snow events between 1958 and 2011.

“The choices we make today can help determine what our climate will be like in the future,” the scientists write. “Putting a limit on heat-trapping emissions, encouraging the use of healthier, cleaner energy technologies, and increasing our energy efficiency are all ways to help us to avert the worst potential consequences of global warming, no matter what the season.”

So can a similar correlation be found between tornadoes and climate change? According to The Atlantic Cities, the notion is not too far fetched but more research needs to be done, as warmer temperatures create the ideal situation for tornadoes.

“Climate change is supposed, among other things, to bring warmer and moister air to earth. That, of course, would lead to more severe thunderstorms and probably more tornadoes,” writes The Atlantic Cities. “The issue is that global warming is also forecast to bring about less wind shear. This would allow hurricanes to form more easily, but it also would make it much harder for tornadoes to get the full about lift and instability that allow for your usual thunderstorm to grow in height and become a fully-fledged tornado. Statistics over the past 50 years bear this out, as we’ve seen warmer and more moist air as well as less wind shear.”

“Meteorological studies differ on whether or not the warmer and moister air can overcome a lack of wind shear in creating more tornadoes in the far future. In the immediate past, the jet stream, possibly because of climate change, has been quite volatile. Some years it has dug south to allow maximum tornado activity in the middle of the country, while other years it has stayed to the north.”