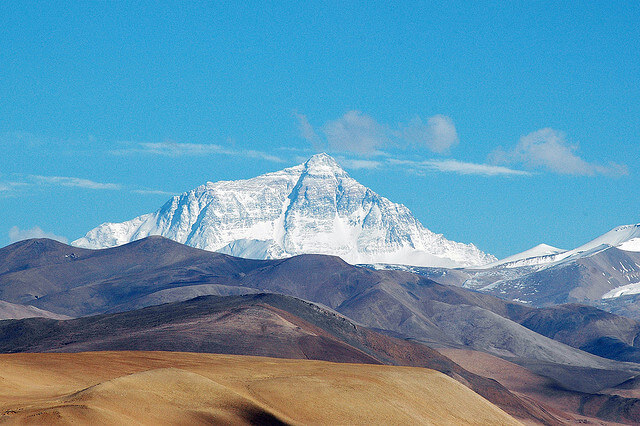 Well, here’s a shocker: Mount Everest is melting and the culprit is climate change. (Note sarcasm)

New research suggests that the overall warming of the world due to greenhouse gases is melting the tallest mountain: Mount Everest.  Presented during a conference co-sponsored by the American Geophysical Union (AGU) in Cancun, Mexico, the authors of the study reveal that glaciers on Mount Everest have decreased by 13 percent in the past 50 years.

Thakuri’s team used satellite imagery and topographic maps to track the region’s glacial movements, and used hydro-meteorological data from the Nepal Climate Observatory and Nepal’s Department of Hydrology to examine temperature and precipitation changes. Their data shows that the temperature in the Everest region has increased by sightly more than 1 degree Fahrenheit, with a 3.9 decrease in precipitation during the pre-monsoon and winter months in the past two decades.

Discovery notes that even small increases in temperature can have large consequences on the mountain, where melting glaciers could lead to flooding, rock slides and avalanches that could damage the ecosystem.

Furthermore, loss of glaciers and snow would change the appearance of Mount Everest from a snow-covered landscape to a rocky mountain peak with patches of snow.

These changes could also have dire consequences for surrounding human populations, according to Thakuri.

“The Himalayan glaciers and ice caps are considered a water tower for Asia since they store and supply water downstream during the dry season,” Thakuri said in a statement, reports The Huffington Post. “Downstream populations are dependent on the melt water for agriculture, drinking and power production.”

Unfortunately, it’s not just Mount Everest. According to a new study, reported by BBC, the glaciers in the tropical Andes have shrunk by 30-50% since the 1970s. These glaciers are crucial, as they provide fresh water in South America for tens of millions of people.

The study, published in the academic journal The Cryosphere, blamed the melting glaciers on the temperature rise—specifically, the rise of 0.7C from 1950 to 1994. As a result, glaciers at lower altitudes (below 5,400 mm) have lost roughly 1.35 m in ice thickness annually after the late 1970s.

“Because the maximum thickness of these small, low-altitude glaciers rarely exceeds 40 metres, with such an annual loss they will probably completely disappear within the coming decades,” said lead author Antoine Rabatel, from the Laboratory for Glaciology and Environmental Geophysics in Grenoble, France, to BBC.

This news come just two months after we shared that the melting rates of glaciers in Antarctica are accelerating due to global warming, according to a new study by a Texas A&M University researcher. Alejandro Orsi, associate professor of oceanography, and his colleagues from the University of Gothenburg in Sweden, “examined the entry to one of three cross-shelf passages in the Amundsen Sea that allow warm oceanic water to reach beneath the ice shelves in front of the Thwaites and Pine Island Glaciers, which show the fastest thinning.” Their findings were far from ideal: They found a year-long persistent inflow of warm bottom water along this trough.

What’s more, Austrian scientists at the University of Innsbruck have also found that the single greatest cause of rising sea levels over the past century are melting glaciers. The scientists disclose that between 1902 and 2007, the total sea level rise was 20 centimeters (about 8 inches) and of that, glaciers melting contributed 11 centimeters (4.33 inches). They estimate that by the year 2100, melting glaciers could potentially raise sea levels by an additional 22 centimeters.