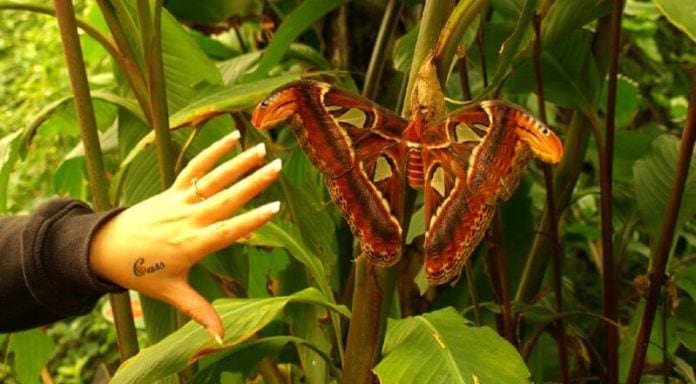 It is hard not to love butterflies. These winged insects are benign, and their wings are extremely beautiful. Most people are familiar with the average sized butterflies like the Monarch, or the Hawkmoth. However, there are butterflies and moths in the world of Jurassic proportions. We are lucky these insects eat only nectar. Unfortunately, they only live in certain parts of the world and some are considered endangered or protected. If you get a chance to see one of these three winged insects in their natural environment, take it before they disappear.

The Atlas Moth is the world’s largest moth. It lives in the Malay Archipelago and has a wingspan of up to twelve inches across. That is a foot in diameter! The Atlas Moth is primarily orange and brown in coloring with ornately designed wings and a fat body. It is common in the region and draws a lot of attention from tourists. People in Taiwan even use the Atlas cocoons for purses. The Atlas caterpillar gets to about an inch thick in size.

Discovered in 1906, the Queen Alexandria’s Birdwing is officially the world’s largest butterfly. It is said that the first butterfly discovered was actually brought down by a shot gun. The female butterfly’s wings can reach twelve and a half inches in diameter, while the male’s wings are usually much smaller. You can also identify a female Queen Alexandria by her black wings with yellow spots. The males are more ornate with black wings and blue-green spots. Sadly, the Queen Alexandria is considered endangered as it only lives in remote areas of Papua New Guinea that are threatened by encroaching development.

The Goliath Birdwing is the second largest butterfly in the world. Its wingspan reaches up to eleven inches. However, the Goliath is definitely the prettiest of the three winged insects. The male’s wings are decorated in bright yellow and green rimmed with black and it has a bright yellow body. Female Goliaths are definitely the larger of the two genders and have mostly dark brown with white and yellow spots. The Goliath also lives in New Guinea and surrounding islands. Goliaths are protected, but they are also harvested and sold as tourist oddities with the proper permits.

Who knew that there were such large butterflies and moths in the world? It’s hard to declare these as the largest insects in the world. These three insects are certainly the largest of the winged variety. Other insects, such as beetles and walking sticks also get quite large. For instance, the Giant Weta of New Zealand gets to be larger than the palm of your hand. It is known to eat carrots when hand fed. The gigantic sized insects of millennia past still exist in some form as these butterflies can attest.

If you get a chance to see one of these three winged insects in their natural environment, take it before they disappear.