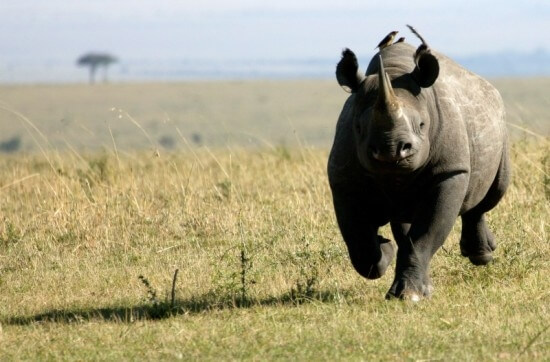 “What is your personal carrying capacity for grief, rage, despair? We are living in a period of mass extinction. The numbers stand at 200 species a day. That’s 73,000 a year. This culture is oblivious to their passing, feels entitled to their every last niche, and there is no roll call on the nightly news.” — Lierre Keith, Deep Green Resistance: Strategy to Save the Planet.

Sad news swept across our global community recently in light of the official extinction of the West African black rhino, which up until now had spent a long, shaky time on the critically endangered list.

According to the WWF, the rapid loss of species we are seeing today is estimated by experts to be between 1,000 and 10,000 times higher than the natural extinction rate. These experts calculate that between 0.01 and 0.1% of all species will become extinct each year (between 200 and 2,000 species per annum).

Baiji dolphin
The last documented sighting of China’s baiji dolphin occurred in 2002, and in 2006, it was declared “functionally extinct”— meaning too few potential breeding pairs remained to ensure the species’ survival.

Hawaiian crow
This native Hawaiian bird was declared “extinct in the wild” in 2002.

Pyrenean ibex
By the early 1900s this once abundant species was only found in numbers fewer than 100. The last Pyrenean ibex was found dead in northern Spain on Jan. 6, 2000.

Spix’s macaw
The last known macaw in the wild disappeared in 2000 and no others are known to remain.

Black-faced honeycreeper
Listed as “critically endangered/possibly extinct” as of the three known remaining birds discovered in 1998, one died in captivity in 2004 and the remaining two have not been seen since that year.

Alaotra grebe
Declared extinct in 2010, although experts believe it might have been extinct years earlier.

Pinta Island Tortoise
The last of his kind, Lonesome George died in June 2012 in his pen at a research facility.

Canarian Oystercatcher
Declared extinct in 1994. Only 4 specimen of the bird (stuffed) exist in museums today.

Ivory-billed Woodpecker
The last definitive sighting of this bird was in the 1940s and it was declared officially extinct in 1994.

Mariana Mallard
The last pair of these ducks were spotted in the wild in 1979, and the last known pair in captivity died at Sea World in San Diego in 1981.

Dusky Seaside Sparrow
The last known specimen died in 1987, and the species was officially declared extinct in 1990.

Javan Tiger
By 1993 all evidence of remaining specimen in existence had disappeared.

Japanese Sea Lion
Commercial hunting for these along with habitat loss due to WWII did these seal lions in by 1974.

Conondale Gastric-brooding Frog
The last frog of this kind died in captivity in a laboratory in 1983. What’s next to go? See Mother Nature Network’s list of 10 animals on the verge of extinction.