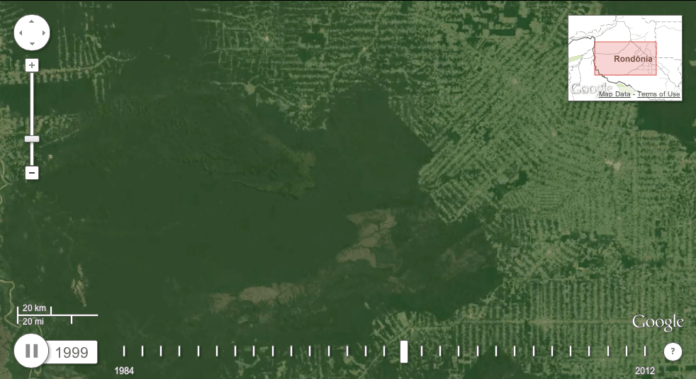 Landsat images and the Google Earth Engine have been able to show us how the Earth’s surface has been changing, reports TreeHugger.

“Today, we’re making it possible for you to go back in time and get a stunning historical perspective on the changes to the Earth’s surface over time,” says Google. “Working with the U.S. Geological Survey (USGS), NASA and TIME, we’re releasing more than a quarter-century of images of Earth taken from space, compiled for the first time into an interactive time-lapse experience. We believe this is the most comprehensive picture of our changing planet ever made available to the public.”

The images focus on key areas on our planet—such as the Amazon rainforest, coal beds of Wyoming, Columbia Glacier, the Aral Sea, and the Saudi Arabian desert—and has found that the rainforests are, in fact, disappearing.

“Explore a global timelapse of our planet, constructed from Landsat satellite imagery,” says Google. “The Amazon rainforest is shrinking at a rapid rate to provide land for farming and raising cattle. Each frame of the timelapse map is constructed from a year of Landsat satellite data, constituting an annual 1.7-terapixel snapshot of the Earth at 30-meter resolution.”

Brazil’s Amazon rainforest has many accolades to its name: It is the largest tropical rainforest in the world covering over five and a half a million square kilometers, it is the home to 10 percent of the world’s known species and 20 percents of the world’s known bird species, and it is that 2.5 million different insect species and over 40,000 plant species live in the Amazon rain forest. Tragically enough, the diversity seen in the Amazon rainforest has been threatened for years due to human activity. It has been estimated that almost 90 percent of the rain forest is now gone, having been replaced with roads and cities, and as a result, the biodiversity has also taken a hit.

Related:   MTV Trashes the Rainforest While Filming A New Show

In 2007, the National Geographic shared the concerns the Amazon was facing:

During the past 40 years, close to 20 percent of the Amazon rain forest has been cut down—more than in all the previous 450 years since European colonization began. The percentage could well be far higher; the ﬁgure fails to account for selective logging, which causes significant damage but is less easily observable than clear-cuts. Scientists fear that an additional 20 percent of the trees will be lost over the next two decades. If that happens, the forest’s ecology will begin to unravel. Intact, the Amazon produces half its own rainfall through the moisture it releases into the atmosphere. Eliminate enough of that rain through clearing, and the remaining trees dry out and die. When desiccation is worsened by global warming, severe droughts raise the specter of wildﬁres that could ravage the forest. Such a drought afflicted the Amazon in 2005, reducing river levels as much as 40 feet and stranding hundreds of communities.

As we reported last August, the diversity seen in the Amazon rainforest has been threatened for years due to human activity. It has been estimated that almost 90 percent of the rain forest is now gone, having been replaced with roads and cities, and as a result, the biodiversity has also taken a hit.

Brazil is reportedly going to create a census of its rainforest trees by counting each in an attempt to better learn how to conserve its trees. When you think about it, it is a difficult task to know when you’re losing trees, until it’s blatantly obvious, without having a headcount (or should I say “canopy count?”).

The planned tree census, set to take four years, ‘will allow us to have a broad panorama of the quality and the conditions in the forest cover,’ the ministry said in a statement. The head of the national forest service said that the survey will provide a detailed knowledge of the rainforest, which has been under environmental threat from logging and climate change.

Wondering how Brazil will tackle this daunting task?

“Teams sent across Brazil’s 3,288,000 square miles, encompassing about half of the world’s remaining tropical forest, will sample about 20,000 points at 20-kilometer intervals,” reports Fast Company. “Researchers will log the number, height, diameter, and species of trees, along with soil types, biomass carbon stocks, and even local people’s interactions with the forest at each site. Once completed, it will the most comprehensive national inventory in Brazil since 1983.”