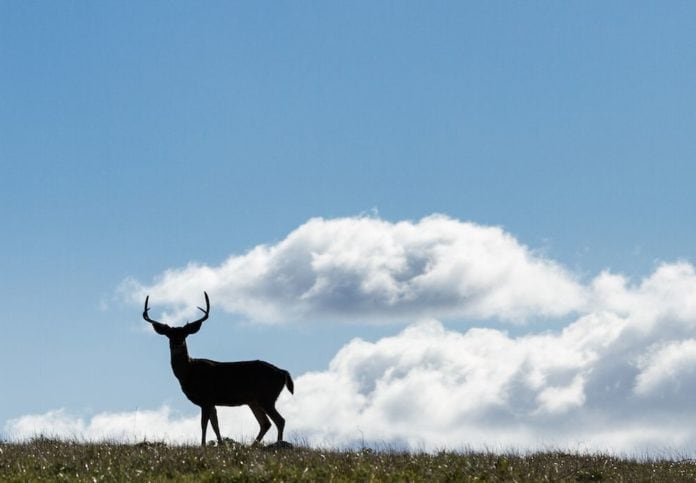 Hundreds of native tule elk confined behind fences at the Point Reyes National Seashore near San Francisco have died of thirst since 2012, unable to leave their enclosures to find water after their fresh water pools dried up.

As a subsidy to cattle and dairy farmers leasing land below market price to graze their animals within the national seashore, the Park Service utilizes taxpayer dollars to maintain a fence that confines a herd of the native tule elk brought back from the brink of extinction.

Called “sorry varmints” and considered “invasive” by the ranchers who claim public land as their cows’ personal supermarket, the tule elk numbered up to 500,000 at the start of the Gold Rush.  Hunters soon wiped out the great herds, making room at the Point Reyes National Seashore for beef and dairy operations.

These magnificent animals were believed totally extinct until 1874 when a wealthy land owner spotted about a dozen on his property and protected them from hunters. Those few 800-lb. elk grew into the 4,300 ancient California residents that grace the state today.

Then, in 1978, 10 tule elk were moved to an ecological preserve in Tomales Point, within the national seashore, where their numbers grew to 540 in 2012 before the drought, and dropped to 286 by 2014 – a death rate of 47%. These elk died because there are no natural year-round fresh water sources within their fenced area, and they are prevented from migrating by the large barrier.

In contrast, two groups of free-roaming tule elk at Point Reyes increased their populations during the same period by 32 percent, according to the Center for Biological Diversity.

And these are the herds creating conflict in the area, pitting the organic beef and dairy farmers who have to purchase extra hay if there is not enough grass for their cows, against environmentalists and about 90% of the citizens of California who have made comments to the Park Service regarding a request by ranching interests to build another huge, elk-proof barrier to confine the free-roaming herds.

“The vast majority of the 3,094 public comments on a ranch-management plan support allowing a free-roaming tule elk herd on the peninsula, with 90% urging the park to make protection of the animals a priority,” according to the SF Gate.

While the smells and sights of cattle operations might be interesting to some, it seems the elk, who can’t be found in any other area of the planet, are likely a greater draw for the 2.6 million tourists who visit the Point Reyes National Seashore annually.

“The public doesn’t want these elk relocated, fenced into an exhibit, shot, sterilized or any of the other absurd proposals from ranchers who enjoy subsidized grazing privileges in our national seashore,” conservation advocate with the Center for Biological Diversity Jeff Miller told the SF Gate. “I think on balance the cattle are eating more grass that’s supposed to be going to wildlife than the other way around.”

The ranchers are calling the situation an “emergency,” referring to themselves as “more endangered than the elk.”

The drought is forcing them to pay the real cost of organic hay, and they are demanding taxpayers foot the bill to keep them in business at the price of allowing hundreds of native animals to die slow and painful deaths from thirst.

The irony is beef and dairy operations exacerbate the drought through the wastefulness required to maintain these kinds of businesses.

“Cattle-ranching requires excessive amounts of water – each beef and dairy cow drinks 12 and 35 gallons of water per day, respectively,” according to the center.

“Accounting for all water use, a typical dairy farm with around 700 cows can use over 3 million gallons of water every day; and every pound of California beef requires about 2,464 gallons of water to produce.”

Rep. Jared Huffman, D-San Rafael, summed up the cost of meat and milk operations best when he told the SF Gate. “The assumption that a few people have, that elk and cows can somehow live together, is naïve.”

The assumption many people have that any native animal and cows can somehow live together is naïve.

“America’s livestock industry – particularly through grazing on public lands – is one of the greatest threats to endangered species and habitat,” according to Take Extinction off Your Plate.

Amazon rainforests are being slashed and burned to create pastures for beef cattle. Wolves in America are facing another round of extermination to eliminate perceived threats to livestock. The list goes on and on.

We are facing the sixth mass extinction and it’s our fault. The good news is we have three simple opportunities a day to heal the world. Cows are only one of the many victims of a hamburger. Hopefully we can learn to enjoy a more plant-based diet before we become one of them.