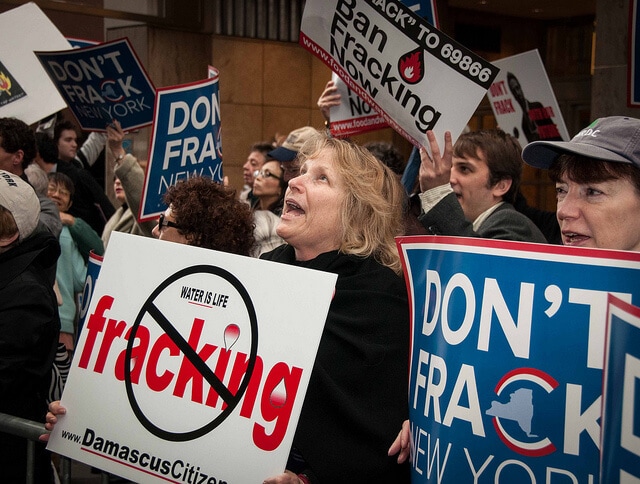 Fracking is the latest environmental hot topic, especially in the American North East.  The discovery of a layer of natural gas beneath New York, Pennsylvania and Ohio has torn the states apart and brought out a lot of political tension. Gas companies want to move in to extract the resource; while some citizens refuse to allow these companies to do this work, others are staunchly opposed to the drilling. The citizens are split between those who want to welcome the gas companies and those who want them to leave the area and drill no gas at all.

Those who want to see the companies leave believe that the fracking process is extremely harmful to the environment and detrimental to the community enjoyed by everyone. The method which is used to extract the oil scars the land and the gas workers who come in ruin many advantages in the area.

The process to withdraw this natural gas is a very violent one. Trees need to come down, holes need to be dug, and waste needs to be extracted and disposed of. The number of trees cut down is not negligible; whole hillsides are cleared for these companies. The holes dug may be small, but the earth moved to create them sometimes destroys entire mountainsides. Avalanches due to destruction of soil further destroy the natural ecology of the mountain. Finally, the waste extracted from these sites leaks into the ground water. Homes that once depended on this water for use in wells and irrigation can no longer do so; it is now dirty and toxic. Additionally, some of the chemicals used to extract the natural gas are “accidentally” seeping into the local water supplies. Once potable water is now toxic and unsafe.

Damage to the modern conveniences associated with fracking is also high. Another reason that people are opposing fracking is that the trucks are destroying the roads. Roads which were originally built for light use by cars and occasional truck traffic are now being used daily for large, heavy trucks. The roads aren’t up to the task, and are being destroyed. The workers who come in to frack the land are grabbing rentals and homes, pushing housing prices up. What was once a laid back area with reasonably priced homes is now a high-priced area full of turbulence.

People are protesting fracking in all three states. The Marcellus Shale needs to stay where it is, according to these local advocates. While their neighbors may be welcoming the natural gas drillers openly, these protesters are using images of scarred land, water tests, and nightmarish images of past fracking in the southern United States to make their case. The roads are torn apart, the natural beauty of the land is being destroyed, and the potable water is disappearing. People are getting angry.

The Future of Fracking

Fracking may never be widely accepted by most of the people in the area. Since the debate has two very passionate sides, the happy medium necessary to find peace on both sides continues to look like a distant dream. The gas companies will either drill or they won’t; those living in areas that have already seen the consequences of fracking urge citizens of the Northeast to say no. Those who see the monetary potential that fracking offers say yes. The number of people in favor of fracking in the Northeast is dwindling as more reports of damage to land and infrastructure pour in.

Environmental issues are rarely black and white. There are always grey areas, and this issue seems to dwell exclusively in that uncomfortable half light. When gas companies offer homeowners vast amounts of much-needed money to lease land space for drilling, it’s hard to say no. After driving through areas destroyed by the fracking, it’s hard to say yes. Since the majority of people like to have potable water and enjoy the use of passable roads, there will probably never be wide acceptance for this practice.