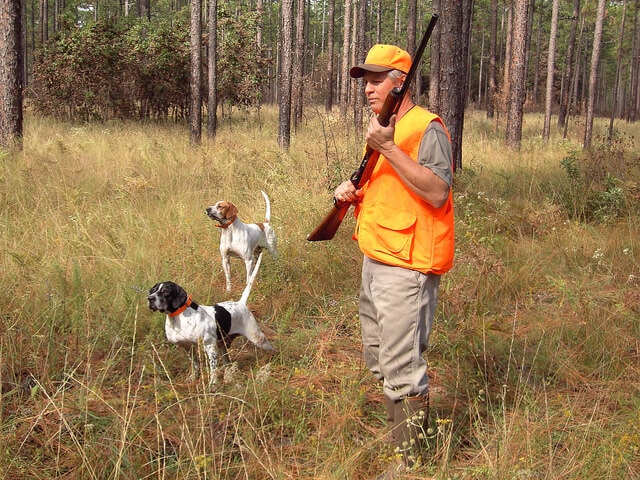 Last year the California legislature passed SB 1221, which bans using packs of dogs to chase bears and bobcats during hunting. This year, another California politician has introduced a bill, AB 1230, to overturn the ban.

Sounds like a nice thing to ban. I can think of few things more terrifying than to be chased by a pack of dogs intent on tearing me to pieces. Often, the animal being hunted climbs a tree only to be shot down by the hunter.  If the unlucky animal is lucky enough, the hunter is a great shot and he’s dead before hitting the ground. If not, it’s down to the dogs who finish the job.

So, ok, we hate to think of something like that happening to the wildlife that belong to all Californians, not just the 5 percent or so of us that kill them for fun.

Hunting sites and magazines are extolling the new bill, introduced by Assemblyman Tim Donnelly, as restoring their hunting rights and protecting their culture of killing from being slowly destroyed by the evolution of human compassion – though they used more choice words to describe the process.

One point I must give the human predators is their claim that using dogs while hunting can actually make the process more humane.

Let’s start with the first problem, the hunters, of course.

These guys, and even more disappointingly some women, are not desperate for food to feed their families, so when they shoot an animal and it gets away, they are very unlikely to pack up all their cans of Nattie Ice and risk losing their store-bought hamburger to a raccoon raid while they are off tracking the wounded animal with no guarantee that the crippled creature will actually be found.

The dogs, being immune to a modern hunter’s standard of waist circumference, ignorance and blood alcohol level, are thrilled to do the hard work, and most often do it well.

So we can say with some level of honesty that using dogs while hunting keeps more wounded animals from languishing for days in agony than just being exposed to a few hours of terror, torture and death.

And the second and biggest problem is that hunting is legal at all.

Enough of us can’t stand to imagine a majestic bear or a masterpiece of a feline being chased down and ripped apart by dogs just so some sorry excuse for a human being can prove that evolution has selectively excluded him and his actions that the original bill banning hounding in California passed with little noise.

But in reality the hounding ban did little to relieve our overtaxed wildlife from the most direct assault by humans on their ability to exist. The same number of animals is still allowed to be hunted: 1,600 bears and 1,200 bobcats.

We outlawed the killing of our mountain lions years ago, why couldn’t we do the same for bears and bobcats?

Hopefully, more than anything, AB 1230 will put the spotlight on exactly what hunters are doing out there in the woods, and most of us will be sickened.

This shouldn’t be a matter of choosing between less torture and more torture. If we can chose no torture, than it is our responsibility to ensure that our animals are not allowed to be further tormented by a small percentage of demented individuals who find true pleasure out of killing.

We would need 807,615 signatures to put a ban on hunting bears and bobcats on the state ballot.

Then it would be up to us to decide if we want to live in a state that allows a few bullies to engage in gratuitous and unnecessary violence against the beautiful animals that are a part of all of our heritage.

New Research Proves a Goat and a Dog Can Fall in...