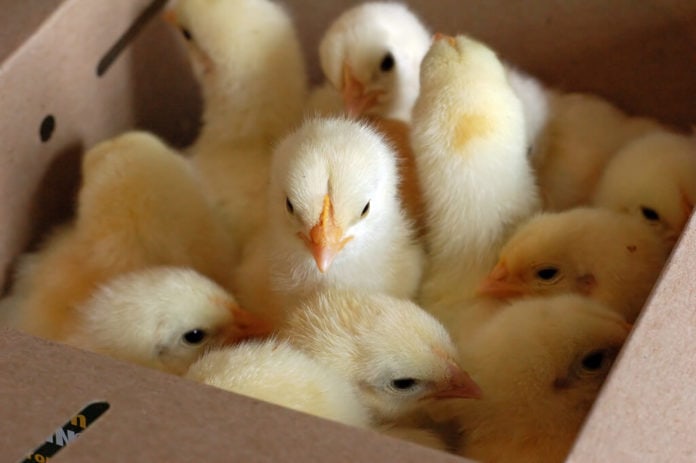 WARNING: The links below may lead to graphic photos and videos of animal abuse in factory farms.

U.S. animal rights organization Mercy for Animals started moving their efforts into Canada just a couple years ago, and already they’re making great strides. Over the past week, the group exposed abuses at two leading Canadian factory farms. Though the footage they shot is unpleasant to read about and watch, Mercy for Animals’ findings are paving the way for improved animal rights legislation nationwide.

Earlier this month, the group released footage of poultry abuse at Maple Leaf Foods-owned Horizon Poultry in Hanover, Ont. that showed chicks being euthanized by boiling them alive in a dishwasher and pushing them through a grinder with a squeegee. A desensitized employee is heard laughing about the abuse, saying, “They boil! I have no sympathy for them anymore.” Maple Leaf, who claims a zero-tolerance policy toward animal abuse, has since suspended this employee without pay.

Industry standards allow employees to euthanize chicks by running them through a grinder, but not in a way that causes avoidable injury or distress. Clearly, the actions shown in the undercover video were not compliant with these standards.

About a week later, footage from a cruelty probe at a Delimax-affiliated veal farm near Quebec showed calves being kicked and punched, chained by the neck and held in filthy crates so small they can’t walk, turn around or comfortably lie down. In one heartbreaking scene, a veal calf suckled a bucket near its crate, missing its mother.

Beating animals violates the Criminal Code of Canada, and a criminal investigation of the veal farm is now taking place. Unfortunately, Canada has few other cruelty laws concerning animals. Because the farm industry is self-regulated in Canada, violations of industry standards are not subject to legal action or even government inspection.

Related:   Backyard Chickens are a No-Go in Winnipeg

The footage in both investigations was shot by Mercy for Animals affiliates who were able to get jobs at these factory farms. Their findings build on Mercy for Animals Canada’s exposés of a Manitoba pig farm last year and an Ontario turkey farm last month. Thanks to Mercy for Animals’ efforts, the turkey farm installed hidden cameras and the Retail Council of Canada committed to ending the use of gestation crates for pregnant sows. Their recent investigations show promise of similar changes to benefit animals. The Retail Council is currently considering a poultry code to define acceptable standards for raising chickens and other birds raised for meat. And after the veal farm investigation, Mercy for Animals hopes the Council will consider ending the use of crates to confine calves.