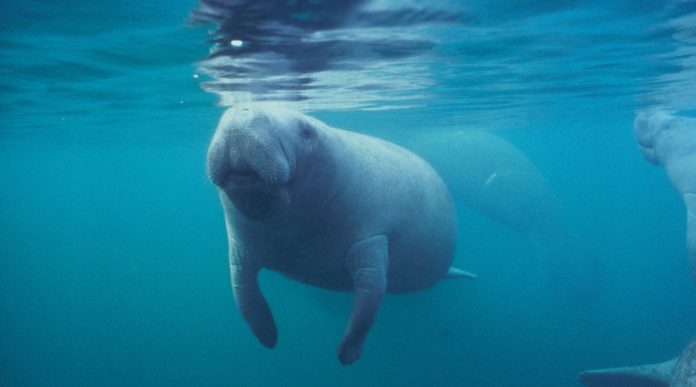 The already endangered manatees are not even more threatened in their environment, courtesy of a toxic read algae bloom off the western coast of Florida, reports The New York Times.

“The tide has killed 241 of Florida’s roughly 5,000 manatees, according to the state Fish and Wildlife Research Institute, and the toll appears certain to rise,” writes The New York Times. “The number of deaths from the tide far exceeds the previous annual record of 151.”

“Southwest Florida is an area where a lot of manatees are during the winter months,” said Kevin Baxter, a spokesman for the research institute, to the New York Times. “It’s a warm-water area. The bloom has persisted there for quite a while.”

Reuters shares that this year’s Red Time bloom began last fall in the Gulf of Mexico in a 70-mile swath of southwest Florida; which is the home of an estimated 5,000 manatees.

Baxter adds that even though the algae was gone by mid-March, it will still claim lives of manatees because the toxin still clings to sea grasses—manatees can eat up to 100 pounds of sea grass a day, making them at risk of the toxin long after the algae is gone.

The state’s annual red tide affects a wide range of aquatic animals and can cause problems in people. The algae contain a nerve poison known as brevetoxin that is not only found underwater but that is also blown through the air when waves break open the algae’s outer casing.

Manatees, birds, dolphins and other animals can be killed by consuming the poison, either by accidentally eating the algae or by ingesting small organisms clinging to sea grass that have soaked up the poison while filtering seawater.

“The naturally occurring algae sometimes grow out of control for unknown reasons, turning the water red and producing high concentrations of toxins that can harm people, fish, birds, sea mammals and shellfish,” writes Reuters. “The toxins are usually inhaled by manatees when they come up for air, typically every 20 minutes. Because the toxins settled into the sea grasses, the manatees were ingesting them as well. Inhaling or eating the toxins can spark seizures and paralyze the manatees, causing them to drown as they struggle to breathe or surface for air.”

According to SaveTheManatee.org, the United States government protect the animal under two federal laws: The Marine Mammal Protection Act of 1972 and the Endangered Species Act of 1973. The two laws “make it illegal to harass, hunt, capture, or kill any marine mammal.” What’s more, manatees are also protected by the Florida Manatee Sanctuary Act of 1978.