Diamond mines leave the earth pocketed with craters. These deep cone shaped holes can make sink holes look like a community gopher hole when compared to the gaping earth scars left by diamond mines. Some of these diamond mines are so vast they could swallow a small city within its limits. These inverted craters are like mini mountains dug deep into the caverns of the earth.

In mankind’s thirst and hunger to strip the earth of everything shiny and glittery, these diamond mines have been often created with little regard for the damage they cause. These deep wells of broken earth leave the earth’s surface and subsurface dug up, scraped, penetrated, contaminated, perforated, sunken and barren. The top ten offending diamond mines showcase this issue. While many people are unaware what lies beyond the gates and fencing, from the sky the damage to the region is evident. The issue at hand is while some mining practices reduce the diamond price index, the increased output methods often cause extensive damage to the environment. It is evident these mine companies’ main goal is production and quantity, not environmental safety.

The top ten worst diamond mines for negative impact on the environment sometimes include regions of smaller mines. In an overview, this information shows that a literal mountain of soil would be needed to make the earth whole again in their place.

Related:
7 Ways You Can Help Keep Lakes And Rivers Clean And Pollutant Free

Diamond mining can be regionally devastating for the environment, and the environmental consequences show that the value of a diamond encompasses far more its market price. The land post-mining is often unsuitable for any use, and it can cause vast erosion in the area and the pooling of water when it rains causing mass reproduction sites for mosquitos that breed malaria. 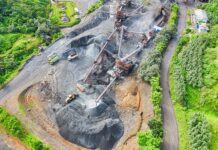