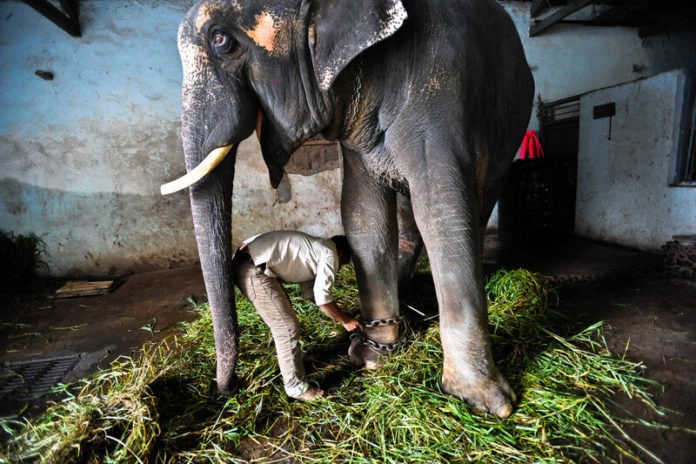 As we reported last week, a recent PETA India investigation revealed that Sunder, an abused Indian temple elephant Paul McCartney hoped to free in 2012, was never really freed as promised, but instead moved to a different location where he endured even worse abuse. After another round of negative publicity and petitions, the Bombay High Court ruled in favor of PETA India and ordered Sunder to be transferred to a sanctuary. Now, the long-suffering elephant awaits relocation to the Wildlife Rescue and Rehabilitation Centre (WRRC) in Bangalore.

Hopefully, Sunder’s fate will not be a repeat of 2012, when his release was announced and celebrated in ignorance of grim reality. After spending nearly a decade in chains that prevented normal movement, and enduring regular beatings, we look forward to seeing photos and video to prove Sunder’s release and enjoyment of sanctuary life. Still only 13 years old, he has many decades to rebuild his life and much to look forward to. He will never forget his abusers and how they treated him, but the sanctuary will offer other elephants and friendly humans to bond with. And of course, he’ll finally get to take a step and lie down, two simple things he missed out on when bound in chains.

We were all rooting for Sunder, who became a symbol for all the estimated 3,500 elephants currently suffering in India’s temples. Unfortunately, those elephants continue to suffer in the wake of their famous peer’s release. India’s Wildlife Protection Act and the Prevention of Cruelty to Animals Act aim to prevent wild animals from this type of mistreatment, but the laws are largely ignored due to inconvenience and lack of resources. According to Dr. Chaitanya Koduri of Peta India, “We are trying our level best to implement the laws but still there are certain violations and one of the primary reasons is, because there are not enough shelters. So the government should put that issue first, that proper shelter which simulates the natural environment because not all the elephants can be released back into the wild.”

There is no word on what punishment, if any, will be given to Sunder’s abusers, other than the loss of the elephant they’ve been torturing for years.

India’s animal rights inconsistencies may seem strange, but in any population there are some who care deeply for animals and others who abuse them for perverse pleasure or some kind of economic gain. In the United States, for example, circus elephants are trained using physical abuse and are kept in chains for much of their lives, not unlike Sunder. Circus trainers go largely unpunished because no government regulations exist to monitor training sessions.

Elephants have long been recognized as some of the most intelligent creatures on earth, and new research continues to uncover their vast mental abilities. We hope that our country and others can learn to give these creatures the dignity, respect and protection they deserve.