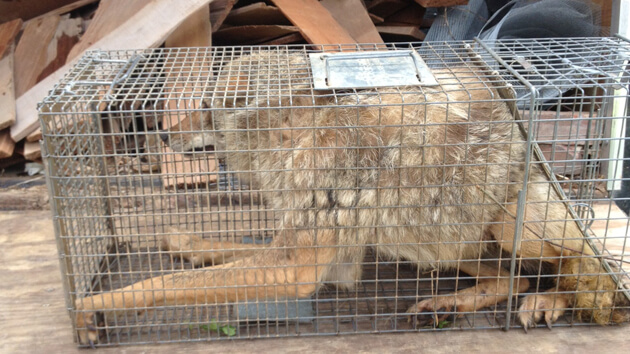 Like most TV channels in this era, Animal Planet has strayed from its original genre of programming and now mainly airs sensational, ratings-grabbing reality shows. Unfortunately, their desperation for ratings has enabled producers and stars to commit several acts of animal abuse and neglect.

In January this year, an exclusive Mother Jones investigation revealed horrific and illegal neglect of animal “stars” behind the scenes of top series Call of the Wildman. In a 2012 episode called “Baby Mama Drama,” wildlife rescuer Ernie “Turtleman” Brown, Jr. supposedly trapped a raccoon mother who had been terrorizing a Kentucky family in their home. Turtleman then carried the raccoon outside, where her cries led him to newborn cubs under the house. Producers admitted everything about the episode was fake — the adult raccoon mother was actually male, the animals were sourced from local farms and the animal droppings on set were made out of rice, Nutella and Snickers bars. Worst of all, Turtleman didn’t rescue the raccoons. That credit goes to emergency workers at the Kentucky Wildlife Center, who fed them fluids, antibiotics and blood plasma when they arrived at the Center close to death after the abuse they faced during their stint on Call of the Wildman. Newborn raccoon specialist Bailey calls their survival a “miracle.”

In another episode of the same show, “Lured Into Danger,” Turtleman traps a coyote in a barn owned by an animal psychic. Like the raccoons, the coyote was caught ahead of time at the producers’ request. Mother Jones has photographic evidence of the animal star-to-be suffering in a cramped cage, waiting over three days for filming to begin. At the time of filming, the coyote was too sick and unresponsive to perform, so the show allegedly brought in a replacement from Ohio.

The Kentucky Department of Fish and Wildlife Resources is currently investigating the alleged illegal acts occurring behind the scenes of Call of the Wildman, which include importing coyotes out of state and failing to provide adequate food, drink and health care to an animal.

It’s upsetting that Animal Planet felt the need to sink to this level. In 2008, the network ceremoniously dropped their cute, family-friendly image and rebranded itself with a bolder logo and dramatic adult-oriented shows. Based on their then-low ratings and observed viewership trends, this was a smart business move (the disappearance of wholesome, educational TV programming is a separate issue). But they could achieve the same goals without putting animals in harm’s way. Focusing on true animal rescues — such as the Kentucky Wildlife Center’s rescue of the baby raccoons who almost died because of Animal Planet’s neglect — would bring the drama viewers crave while raising awareness of a legitimate organization. Here’s hoping that Animal Planet cleans up their act and moves forward with shows that celebrate and help animals.