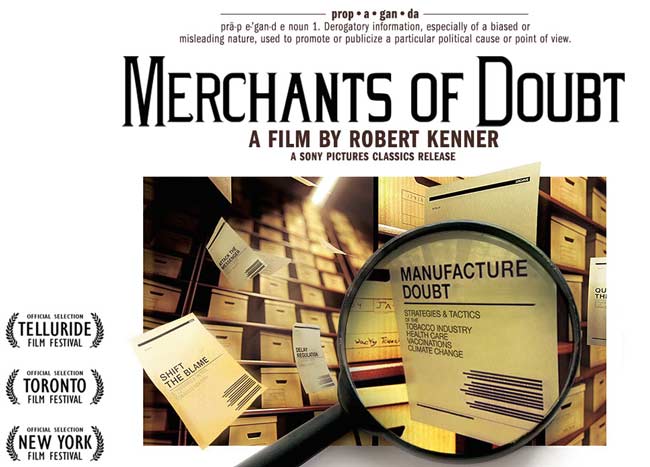 We all know someone who questions the science behind global warming. Whether a coworker, a friend, maybe a parent, they all point to the litany of studies seeking to discredit man-made climate change. These studies, the deniers gloss over, are paid for and supported by the world’s worst polluters.

A new documentary released last week, The Merchants of Doubt, takes a look at the special interests behind these studies. The documentary is an adaptation of the seminal book by the same name by Naomi Oreskes and Erik M. Conway.

Here’s the Grist on the central ideas of the film:

The crux of the film is that the “climate change debate” is not a scientific one — it’s entirely political. People don’t deny climate change because they hate science or because they are stupid — they deny it because they’re afraid of government, and, ultimately, any change that would disrupt life as they know it. The obvious response to that is, well, several meters’ worth of sea-level rise will be pretty disruptive to human life — but, hey, why think about it?

Check out the trailer and forward to a friend!