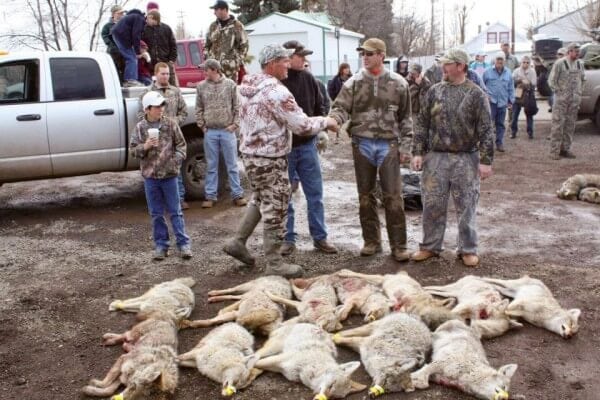 “In the End, we will remember not the words of our enemies, but the silence of our friends.” Martin Luther King Jr.

We may just have a chance to take a bit of the fun out of killing.

On April 16, the California Fish and Game Commission will hear public testimony before voting on whether to make wildlife killing contests illegal in the state.

Hunters are up in arms over the idea that they will not be allowed (legally anyway) to set their bloodlust loose on our few remaining wild lands, kill as many target animals as possible over a set time period, parade the bloody carcasses through the host town, hang the bodies on meat hooks and win prizes for this behavior.

No. I’m serious. This is what they do for fun.

Most recently, the annual Big Valley Coyote Drive in Adin, CA, awarded prizes to teams that brought in the biggest haul of dead coyotes, with special prizes reserved for young killers.

Some contests around the country have even awarded honors for bagging three-legged coyotes (most likely survivors of leg-hold traps who chewed off their own leg to avoid succumbing to starvation, the elements or a trapper’s dogs).

Proponents of the contests assert that coyote drives are necessary to keep the population of these animals down, thus protecting the livestock ranchers want to sell to slaughter and prey animals hunters want to kill themselves.

Although hunters often criticize those who want to protect innocent animals from annihilation for that most un-saintly behavior of acting out of emotion rather than science, study after study has proven that reckless killing of coyotes only leads to population explosions.

In fact, according to a recent pro-killing contest article, Why Coyote Contests Are Good For Hunting, “long-term effects on predator populations are minimal (though in my own admittedly biased opinion, putting even a temporary dent in a local population can benefit a struggling deer demographic).”

So, more killing is good for killing. Is this really what the Constitution is all about? And, even more interestingly, this photo below appeared in the article, begging the question, which species of predator is the author referring to when he says “putting even a temporary dent in a local population can benefit a struggling deer demographic”?

This mad killing frenzy gets a little confusing to those who don’t take pleasure out of gratuitous bloodshed. It’s fun to kill so we should have a right to kill. Predators kill the things we want to kill, so we have to kill them. Killing contests control populations. Long-term effects are minimal.

Laws protecting coyotes simply do not exist. They can be killed day and night 365 days a year. Babies are burned in their dens. We’ve been down this road.

The last lonely wolf in California was trapped and killed in 1924, and ranchers exterminated the last of our state animal, the grizzly bear, in 1908 in Orange County.

Coyotes mate for life and love their babies. They eat other animals, but, unlike us, they don’t have a choice.

It’s true they have moved into historically new territories, but that is only because the holocaust of wolves and grizzlies left a void nature needed to fill in order to keep ecosystems afloat. And if this fact were an excuse to kill coyotes, then we’d have to admit we were wrong to have wiped out wolves and bears in their true natural territories.

The California Fish and Game Commission voted unanimously to allow public comment before considering an outright ban on these contests, which also target other animals like prairie dogs or pigeons.

Fish and Game Commission President Michael Sutton, surely no tree hugger, voiced his concern about the ethics behind contest killing before the commission made its vote.

“I’ve been concerned about these killing contests for some time,” Sutton said. “They seem inconsistent both with ethical standards of hunting and our current understanding of the important role predators play in ecosystems.”

Wiping out coyotes indiscriminately disrupts pack dynamics, and, rather than just alpha males and females breeding, creates an environment where more coyotes breed to make up for losses, which also leads to coyotes being more likely to eat the animals we want for ourselves. 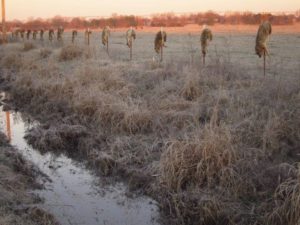 The deep-seated attitude of hatred for Earth’s varied natural predators is nurtured from a young age among those who support the maniacal genocide of our fellow beings. Examples of various tortures, from wolves being skinned alive and let loose to dogs tearing apart tethered coyotes have been the norm throughout history all the way up to today.

These prejudices cannot be reasoned with, and it is for this reason change must come from the outside.

There are only so many times a child can be encouraged to override his natural inclination toward compassion and kill an innocent creature before that inner beauty is extinguished.

Those of us lucky enough to have been allowed to grow up with our full range of evolutionary gifts intact should feel secure that our emotions of compassion and empathy will lead our intellect to make decisions that are good for the preservation of the dynamics of all Life, which, of course, ensures our own survival.

What you can do

How to Kill a Wolf: An Undercover Report from the Idaho Coyote and Wolf Derby – a Vice reporter recently went undercover to expose the extent of prejudice, hatred and violence saturating pockets of American culture.

The Wolf That Changed America – watch the full PBS Nature documentary online and read supporting information on the historic mentality of hatred for this maligned species.

Wiley the coyote: A Wisconsin hunter’s story of love and transformation – for once a story with a happy ending highlighting the beauty and tenderness of coyotes and people who take the time to get to know them.

The Turnbo Manuscripts – A fascinating and sad account of the struggle against wildlife in the Ozarks in the late 19th century. The following is a short example:

“On one occasion when I was a small boy my father [Paton Keesee] caught a big wolf in a steel trap. It would show the animal too much mercy to slay it out right and we determined to punish it with the most cruel torture I could think of. Leaving the wolf fast in the trap I sought the assistance of Ben Risley and Levi Graham which was willingly given. With chains, ropes and stout thongs of dressed buck hide and we tied the animal so secure that it could neither bite, kick or hardly move and with sharp knives we proceeded to remove its hide. This was horrible and was more like the work of savages, but we had been annoyed so much by them that we showed as little mercy toward wolves as the wild Indians did to white people living on the frontiers in the years gone by.

The beast lived through the terrible ordeal and when we loosed it and turned it free it got on its feet and actually ran off out of sight. This was the last seen or heard of it. It is not reasonable that it went far or lived but a short length of time.” 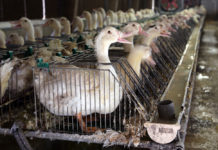