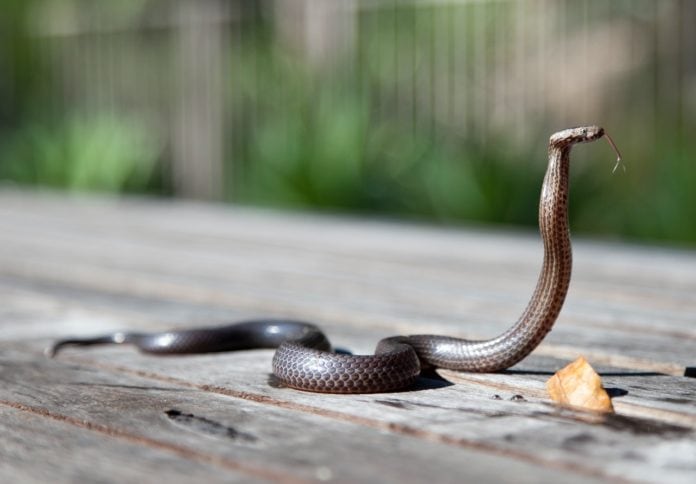 When the US government announced a new scheme to control the population of invasive brown tree snakes in Guam, it didn’t take long for PETA to object. It’s easy to understand why the plan makes animal lovers queasy: the US Department of Agriculture is planning to poison the snakes by stuffing 2,000 dead mice with the OTC drug acetaminophen and dropping them from helicopters into the jungle.

The mice will be outfitted with pieces of cardboard and streamers to help them catch in the canopy, where the snakes live. Brown tree snakes are one of the few species willing to consume dead prey, and acetaminophen is highly toxic to them. Since their accidental introduction to the island 60 years ago, they have wreaked havoc on the local ecosystem.

So what happens to the snakes when they ingest the drugged mice? The drug works by causing kidney and liver failure in the snakes. Within 72 hours, they fall into a coma and eventually die. Needless to say, it’s a little gruesome.

PETA’s director of cruelty investigations, Martin Mersereau, has described the plan as “a massacre” and defended the snakes in an interview with The Guardian, saying, “Brown tree snakes did not ask to be stowaways on planes or ships and then forced to survive on a foreign island.”

It may seem strange that the US is going to such extreme lengths to cut back on the snake’s numbers… until you realize that this 50km island is home to nearly 2 million brown tree snakes. In just 30 years, the snakes have managed to completely wipe out 10 of the 12 wild bird species in the area. At first, scientists assumed the snakes would die out once their preferred food source had run out. Instead, the snakes have adapted to eat whatever they can find — rodents, lizards, and small mammals.

The Department of Agriculture’s greatest worry is that the snakes might once again hitch a ride on a plane and spread to neighboring islands. Hawaii is a particular concern, as experts estimate the impact of the snake’s introduction to the islands at up to $2 billion per year. Knowing what we do about the devastating impact this species can have on isolated ecosystems, PETA’s objections seem a little short-sighted.

Yes, poisoning sounds like a nasty way to die, but the alternative is to allow the snakes to continue to spread. Experts believe that the current infestation in Guam may have started with the introduction of a single pregnant snake. So any proposal to eliminate them in a more “humane” way needs to prove just as effective as simply poisoning them — the risk posed by any surviving snakes is simply too great.

Leaving aside the devastating impact the spread of the snakes would have on local economies, shouldn’t the pain suffered by the birds, lizards, and rodents preyed upon be counted as well? After all, the snakes may not have asked to be taken to Guam, but the birds they prey on didn’t ask to be driven to the brink of extinction, either. A cynic might suggest that PETA’s objections have less to do with reducing the amount of overall animal suffering in the world, and more to do with manufacturing controversy in an attempt to gain publicity.