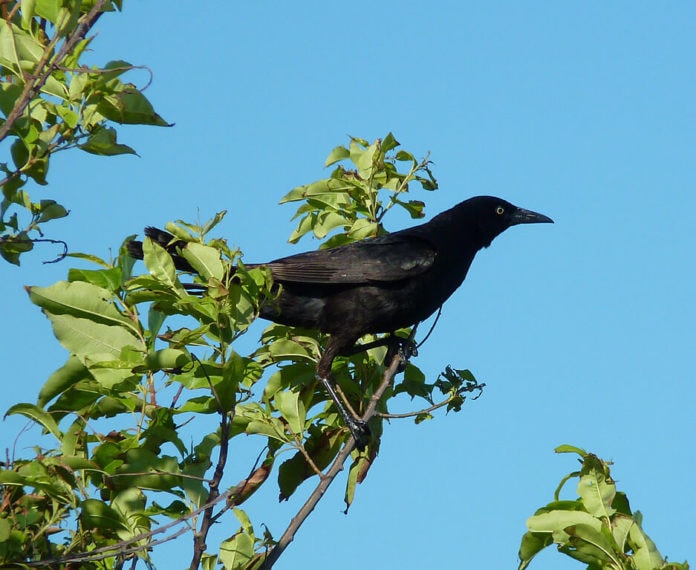 When you want to murder a crow, you shoot for the wings. And from all the online sites devoted to advancing the “sport,” it looks to be great fun.

The senior class of Sasakwa High in Oklahoma agrees, and is sponsoring a crow hunting tournament on March 1st.

What better way to raise money for more of this kind of education than by sponsoring a tournament where humans dressed in camo set up fake crows along the ground and make imitation crow calls to lure in one of the most intelligent animals we share this planet with only to blast it out of the air?

Maybe if my high school had been a little more forward-thinking and held these kinds of fundraisers I would have been cured of this bothersome compassion that compels me to suffer with those who look differently than I do.

When I first read about this crow hunting competition, I was already feeling down about the recent “Squirrel Slam” sponsored by the Holley Fire Station in New York where kids as young as 12 were encouraged to participate in the mass slaughter of the town’s wildlife whose crime is being one of the few wild animals able to coexist successfully with humans.

Other people who also felt that the indiscriminate violence being wrought upon these creatures was unacceptable braved taunting and the pain of having the bodies of the innocent victims being waved in their faces in order to show that not all those with power over the weak feel the need to wield that power without mercy.

Being a bully is fun. That’s what Sasakwa High in Oklahoma is teaching its students, our future society, by sponsoring these kinds of contests. And why not?

How on Earth could some people be Winners, if we didn’t create a class of Losers?

We pretend we’re evolved enough to teach our children this is not acceptable among humans, but we set our children lose on animals who cannot defend themselves against us and ensure that kids will get the message – we don’t really mean what we say.

Same goes for eating meat, although it’s more of a passive way to go about teaching kids to pretend to believe in things they have no motivation to put into practice.

When I first went looking for more information about this crow hunting contest, Google’s front page news headlined the story of the Islamic militants who killed at least 58 students in northern Nigeria after locking their dormitory and setting it on fire. Most were burned alive, but those who tried to escape had their throats slit or were gunned down.

ABC news quoted one teacher as saying that they “slaughtered them like sheep.”

I wondered, exactly how were the students “like sheep”? Did he compare them to sheep because humans kill so many sheep in brutal ways without batting an eye? Or did he mean they were slaughtered “like sheep” because you get the same reaction out of a sheep as a human when they are burned alive, or have their throats slit, or are shot?

I read the article because I was shocked and saddened by the headline, in the same hopeless way I was when I read about a high school in America sponsoring a contest of death, of violence and of killing.

Violence and killing. It becomes more socially acceptable the farther away you get from the image you have of yourself.

Again, our children are taught a double standard, that tolerance for diversity has its limits, and where that limit is varies from one period of time to the next.

We like to think we teach our children that to dominate the weak, to get a high off of pain (the pain of others of course), blood, guts and death denotes some serious psychological issues. But all of these things are being enjoyed by the contestants of the crow killing contest.

In fact all of those things are the only reason hunters enjoy hunting. As many like to point out, vegans kill vegetables all the time to eat. So then, why don’t hunters hunt vegetables, if they are so much alike, animals and vegetables?

The answer is clear: Vegetables don’t scream, they don’t bleed. They don’t display terror and try to run away, to preserve their lives. It wouldn’t be any fun because they don’t do all of the things we are programmed to sympathize with.

We deprogram our youth and confuse them with all of these hypocrisies, a crow killing contest being a screaming example.

We wonder how such good people as us can nourish the kinds of psychopaths that can murder a group of school children, be it in America or Nigeria.

We raise our children on the belief that humans are superior to animals, yet are allowed to act worse than any animal ever considered acting. That we should tolerate others and their differences, but only to a point. And that point is determined by how different they are from us.

I’m sorry for the kids at Sasakwa High. The adults charged with improving this world by raising a generation better than themselves have failed them. They are being taught to enjoy killing, and watching the blood fly, again. They have doomed all of us to another generation of violence.