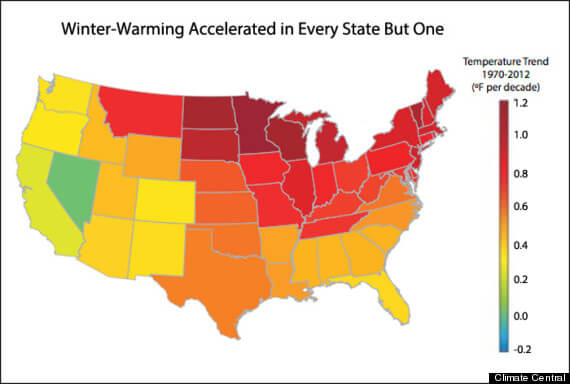 It’s no secret that the U.S. is facing atypical weather with a shorter, but more intense, winters and extreme heat in the summers. In fact, estimates have found that over the past century, the temperatures have  hiked up 1.3°F a year.

“An analysis of data from the U.S. Historical Climatology Network of weather stations shows that the coldest states are warming the fastest, and across the country winter warming since 1970 has been more than fourand-a-half times faster per decade than over the past 100 years,” reports Climate Central. “Winter nights across the country have warmed about 30 percent faster than nights over the whole year. Some states cooled or failed to join the warming trend over the past 100 years, but since 1970, every state has shown winter-warming.”

And there’s some substance to that claim: A soon-to-be published study has found that the rise of blizzards are a result of man-made global warming and that winter is becoming shorter, but stronger.

The Huffington Post shares evidence of the rise in blizzards:

— The United States has been walloped by twice as many of the most extreme snowstorms in the past 50 years than in the previous 60 years, according to an upcoming study on extreme weather by leading federal and university climate scientists. This also fits with a dramatic upward trend in extreme winter precipitation — both rain and snow — in the Northeastern U.S. charted by the National Climatic Data Center.

— Yet the Global Snow Lab at Rutgers University says that spring snow cover in the Northern Hemisphere has shrunk on average by 1 million square miles in the last 45 years.

— And an upcoming study in the Journal of Climate says computer models predict annual global snowfall to shrink by more than a foot in the next 50 years. The study’s author said most people live in parts of the United States that are likely to see annual snowfall drop between 30 and 70 percent by the end of the century.