Alvin Smith, the inventor of Searaser, claims that it is able to generate electricity cheaper than any other conventional method out there, including coal and nuclear.  It seems that new patents for technologies, that supposedly will revolutionize the way we harness energy, are in the news every single week.

In this article, I’m going to go deeper into this new technology, and try to see why British ministers are raving about it. Maybe there’s something to Searaser after all?

The Searaser uses a combination of forces of gravity and buoyancy. Water is pressurized between two buoys in a piston when wave comes in. In other words, wave energy is converted into higher pressure in the water – more potential energy.

Everyone that has taken basic science classes would accept that we could increase the height of this same water if we normalize the pressure.  By using a few of these Searasers we can pump water into reservoirs at higher heights very efficiently. 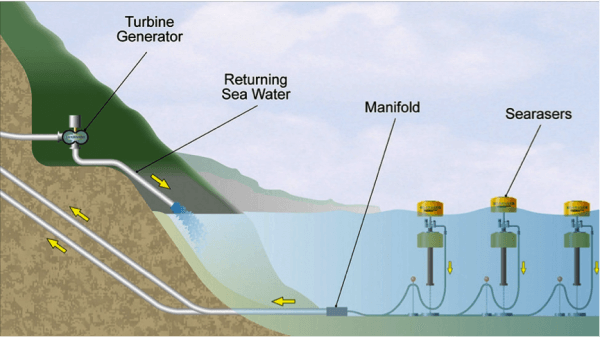 The rest of the method is well known and has been used for almost two centuries: Hydroelectricity. We harness the potential energy in form of elevated water (that can be sourced back to the wave energy) by driving it through a turbine,

What is so different about the Searaser?

There are numerous methods out there that use wave energy as a source to generate electrical power. They all have the advantage of being green and renewable (Wave Energy Pros and Cons), however, not all of them are as cost-competitive as the Searaser – at least not on paper. A few simple, but important aspects of Searaser is the reason why this technology might actually pan out.

Since the components that actually generate electricity (turbine and generator), are separated from the Searasers them, the price of components goes down.  Generating electricity in an environment below and on the surface of the sea requires special components because of corrosion.

Most ways to harness renewable energy, particular solar and wind power, have the disadvantage of being unpredictable. What is the solution to this? Store excess energy from times where there is a surplus of generation compared to demand (e.g. sunny and windy days if we use solar and wind power as an example).

There are many potential ways of doing this, all of which are low-efficiency. If you store electricity generated by solar panels in batteries, large parts of the electricity is already wasted. This is also true for pumped hydro (the type of energy storage used in hydroelectricity) – but to a much smaller extent.

The output of pumped hydro storage can also be easily adjusted, ensuring that the fluctuations of electricity consumption can be taken into account.

Whether or not the advantages listed above will contribute to lowering the costs of Searasers down and below the cost-competitive levels of conventional methods to harness energy remains to see.  The company behind them, Ecotricity, promises to have them out on the market within 2014. 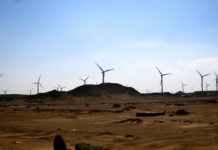