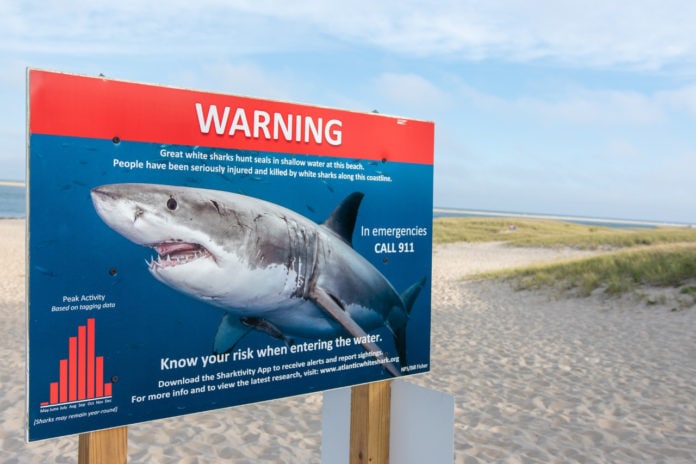 The great white shark is fabled as a remorseless killer to the extent that it is almost the stuff of legends. The reputation of the species was not greatly enhanced by the “Jaws” series of films which portrayed several man-hating giant fish which actively searched for human prey and even for particular individuals. This is, of course, a ridiculous notion and merely the stuff of the movies but how far can the murderous reputation of the great white be justified and are these fish now the real victims?

Despite the fearsome reputation of the species, attacks on humans by great whites are comparatively rare. Great whites prefer marine life for their food and that includes other great whites! In 2012 a fisherman from New Zealand captured an amazing picture of a great white he had hooked being attacked by a larger member of the same species as he attempted to land the fish. Indeed in many areas of the world attacks by great whites have diminished in recent years which could be a sign of their dwindling populations but attacks are sadly showing a recent increase in coastal regions where shark tourism is a factor. In these areas tourists are offered the chance to be lowered into a cage to see great whites up close and personal. Unfortunately the sharks are lured towards the cages by chum as fresh bait, a practice which at once draws sharks closer to the shore and teaches them to associate humans with food.

There are 30 to 50 great white attacks on humans annually worldwide. The majority are not fatal and are the result of the sharks’ curiosity. Sharks lack the digits and sensory perception to deduce exactly what everything they detect in the water actually is and so they use an exploratory bite to find out. The fact that they then rarely proceed to conduct a full blown attack indicates that great whites do not consider humans to be an ideal source of nutrition and therefore do not actively hunt our species.

Whilst great whites do not hunt humans unfortunately humans do hunt sharks. Great whites are fished in some parts of the world and also caught accidently by fishing vessels which are trawling for other species. In addition they are hunted as trophies where the practice is legal and often even where it is not. South Africa banned the fishing of great whites in 1991 but many people still hunted them and it was thought difficult, if not impossible, to bring a successful prosecution against such individuals as it would be necessary to prove that they had caught the animal deliberately. A landmark conviction in 2013 has brought hope to conservationists.

Fisherman Leon Bekker received a large fine or one year in prison for his landing of a great white in 2011. The judge in the case stated that his act had to be considered deliberate as special fishing tackle and fresh bait is required to land a fish of that size and that if you used such tackle you must be aware that catching a great white was a possible consequence.

Although there are no definitive statistics for shark populations, scientists are agreed that the numbers of great whites have diminished to the extent that they are now an endangered species. A recent survey suggested that there are as few as 338 great whites off the coast of California where happily their deliberate capture is now outlawed. These awesome creatures are much feared by humans when, in fact, you are far more likely to be struck by lightning than attacked by a shark. The truth is that great whites are more the hunted than the hunter and if we are not careful we could lose this magnificent animal for good.