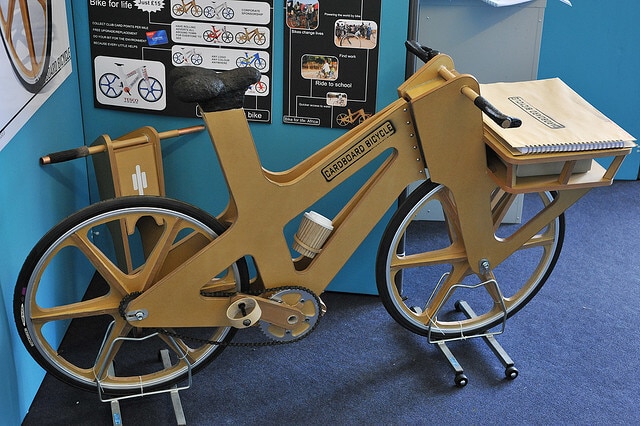 When buying a bike there are a few things to think of such as what it will be used for, how much it costs, etc. Theft is also a worry, as it’s very easy for people to steal a bike or one of the wheels.

According to statistical research, only about ¼ of bike owners will buy a second bicycle after their first one has been stolen and it will usually be cheaper than the previous one. Theft is a real deterrent when buying bicycles.

Well, nobody would steal a cardboard bike, right?

This is one of the things Phil Bridge thought of when making a cardboard bike for the Creative Sparks exhibition by Sheffield Hallam University.

First thing you might think is, “Forget stealing, who would even buy a cardboard bike?” Well, some of the really cheap bikes already use cardboard for some parts.

It’s made so that it’s actually sturdy enough to carry someone and it’s also waterproof. The point of this bike is that it’s cheap – around $30 sale value – making it a real bargain bike.

Give It Some Publicity

Bridge views his bike also as an advertising tool. It can be produced for as low as $15 a piece, so a company that wants to do some creative advertising can rebrand it and give it to people for free, or maybe as an extra reward for purchasing something from them.

There’s also another consideration when thinking of the cardboard bike, which is an environmental one. Nope, bikes don’t pollute already, but they could be made of recycled material or they could even be recycled rather than joining the waste stream once their time has passed.

Bridge isn’t the only one who thought of this, Giora Kariv also built a cardboard bike. His bicycle can carry a person who weights up to 140 Kg, it’s also water proof – just like Bridge’s – and it’s attractive enough to entice people to actually ride it.

But are cardboard bikes just a novelty, or can they really perform? Well Bridge says that for every day use his bike could last you 6 months, and while it isn’t build for racing, it will be just fine alongside ordinary road bikes.

There’s something to be said for people such as Bridge and Kariv – they belong to that category of minds that thinks out of the box, no pun intended, and are able to turn what would be considered a totally crazy idea into something that works.