There is currently an estimated 3.5 million tons of trash floating around the Pacific Ocean, in what’s called the Great Pacific Garbage Patch.

It’s believed the patch spans roughly twice the size of the continental US.

Also known as the Pacific Trash Vortex, the Great Pacific Garbage Patch is not an island or land mass necessarily visible to the naked eye, like many assume.

Instead, the patch is made up largely of broken down microplastics – small particles of non-biodegradable material drawn together at the convergence of different ocean currents – which appear as a kind of cloudy soup.

There are at least 260 known species which feed on these microplastic particles, confusing them for plankton. These plastics then travel up the food chain, resting in the stomachs of increasingly larger predators, like tuna or mahi-mahi, for instance.

It takes about 600 years for plastic in the ocean to fully break down.

It’s then crucial we keep our plastic and litter out of the oceans, or we’ll be eating our trash for ages to come.

Related:
3 Reasons Why the Ocean is Recovering During Covid-19 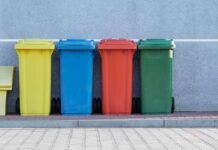