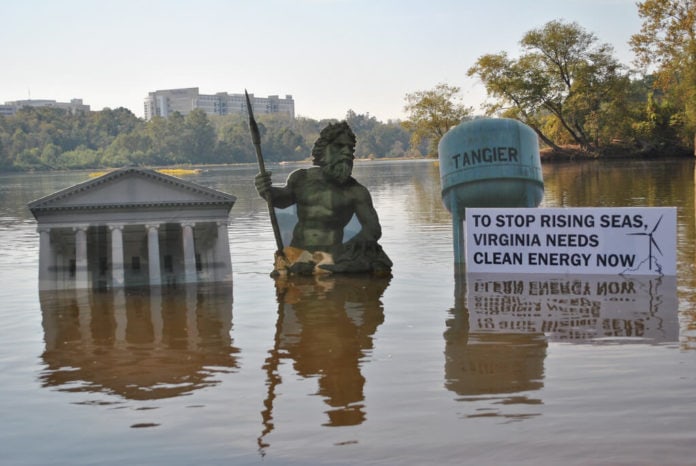 A new study, published Jan. 6 in the journal Nature Climate Change, has found that the previous prediction of sea level rises have been grossly underestimated and that the actual sea level rise could be as much as three feet. The study’s co-author told  NBC News that millions of people would be displaced as a result and cities (such as New York City and Tokyo) would have to spend billions of dollars to prevent flooding.

The Fourth Assessment Report (AR4) of the Intergovernmental Panel on Climate Change (IPCC) had predicted that global warming would result in a sea level rise anywhere between 7 and 23 inches, but the new study states that this 2007 report did not take into account the melting Antarctic and Greenland glacial ice sheets.

“This is the first study of its kind on ice sheet melting to use a formalized mathematical pooling of experts’ opinions,” Bamber said in a news release. “It demonstrates the value and potential of this approach for a wide range of similar problems in climate change research, where past data and current numerical modeling have significant limitations when it comes to forecasting future trends and patterns.”

The authors, J.L. Bamber and W.P. Aspinall of the University of Bristol in the U.K., pooled the findings of other researchers and came up with new estimates for sea level rise by 2100. Depending on the climate-change scenario, they predict that sea levels could rise between 11.4 and 33 inches (there was only a 5 percent chance of reaching this level, according to the experts’ data). If rising temperatures also cause ocean waters to expand, the total sea rise could be more than three feet.

Bamber and Aspinall prepared this paper by polling 26 glaciologists around the world in 2010 and 2012. Bamber told NBC News that this technique, which has been used for earthquakes and volcanoes but not previously for climate change, is “a lot more than an opinion poll” since it rigorously analyzes ice sheet modeling and other information.

Bamber told NBC News that their study offers higher estimates than will be contained in the fifth IPCC assessment report, which is currently in the works. He is also serving as a reviewer of the IPCC report.

As we’ve written before, globally, rising sea levels threaten about a tenth of the world’s population who live in low-lying areas and islands which are at risk of flooding, including the Caribbean, Maldives and Asia-Pacific island groups. According to the World Wildlife Fund (WWF) reports that low-lying island nations, especially in equatorial regions, have been hardest hit by this phenomenon, and some are threatened with total disappearance. What’s more, ocean warming alters the marine food chain, results in ocean acidification and threatens Antarctic wildlife by potentially endangering populations of penguins, whales, seals and a host of smaller creatures within a few decades.