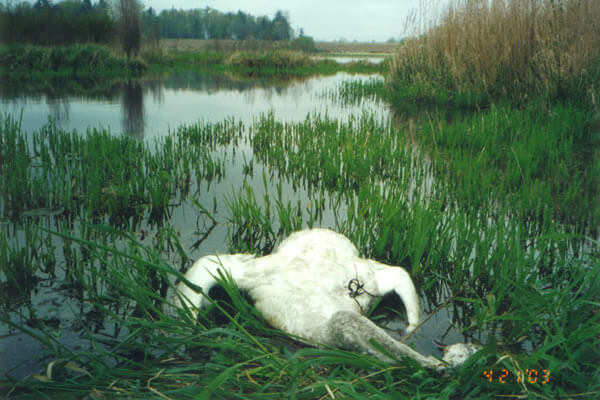 The video below is a feature from Global News in British Columbia, Canada, about an increase in the deaths of Trumpeter Swans in Judson Lake, Abbotsford. Years of duck hunting has resulted in a large collection of lead shot at the bottom of Judson Lake, and a recent decrease in the lake’s water level has made this lead shot accessible to other wildlife, such as swans.

As the swans ingest the lead shot, they become ill and are either picked off by other animals or die in the lake. Kevin and Wrenetta Sinclair, featured in the video below, have seen the terrible effects the lead shot is having on the swan population, and are looking to encourage the government to take action.

However, Judson Lake is unique in that it has dual borders between Canada and the U.S.; Abbotsford, B.C. on one side, and Sumas, Washington on the other. This “dual citizenship” makes the protection of swans in the area an issue for both Canada and the U.S.

To find out more on the issue, and the organizations who are taking action to protect the swans, visit SavetheSwans.ca and The Trumpeter Swan Society.