We here at Greener Ideal are on a constant journey to help shed light on the environmental situations that our world is immersed in. On this journey, we routinely come across hard working people, people who strive in whatever way they can, to help make a difference in life. And we feel that it is part of our responsibility to share such efforts with the vast majority.

Now, when we think of the celebrity world, the red carpet glam, the big Hollywood blockbusters and the rich, superstars living the life, it’s hard to imagine some planetary awareness goes on in that lifestyle. But, there are people who care enough about our world and preserving it, to help make some changes. One such person, who has caught Greener Ideal’s eye many times, is Leonardo DiCaprio.

DiCaprio has played a main role in environmental activism for A-List movie stars. He is constantly involving himself in life changing work, green campaigns and even filming his own documentary, “The 11th Hour”, which highlights man’s current environmental state and how we need to change it. In addition to all of his previous work, DiCaprio has increased his efforts since November, by turning his attention and involvement to a very serious epidemic: the near extinction of the world’s tiger population.

DiCaprio gave a donation of one million dollars to the new Save Tigers Now campaign, whose goal is to raise 20 million dollars for tiger conservation. There are an estimated 3,200 tigers left in the wild today, a staggering decrease from the approximated 100,000 that were around at the turn of the last century. The goal of this campaign is to provide habitat and shelter for the tigers from poaching and other man made impedance on their lives. The WWF hopes to help double the population of tigers in 12 years by 2022, the next year of the tiger.

Efforts like these, made by everyday people and celebrities alike are what Greener Ideal is all about. The successful progression and prosperity of our lives and the world we live in, is solely dependent on the things we do, and steps we take in the right direction. Preserving the natural beauty of our planet and something like Tigers, isn’t just a moral agenda. The preservation of Earth’s ecosystems is entwined in its species’ preservation and an as untouched as possible life. If humans are the main cause of such extinctions and endangerments, then we would be heartless and idiotic to not take a stand. 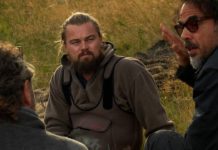 WATCH: Before the Flood, the Leonardo DiCaprio Environmental Documentary