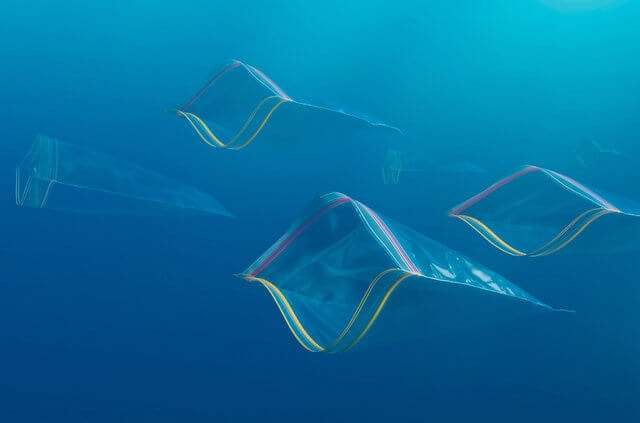 The series features everyday plastic objects floating in the sea looking like jellyfish, polyps, fish and other sealife.

The simple concept was executive with a minimal budget and a very simple setup. Preston tells that she shot the photos using a Nikon D5000, Nikkor 85mm f/1.8 lens, Nikon SB600 flash, and Wesctott 43-inch Orb in her backyard shed.All the objects (except the straws) were hanging from a clothes rack with an extended arm. The backdrop was some blue fabric stapled to the wall. Everything was held together using fishing line, double-sided tape, and gaffer tape. For the bags and shower caps, Preston would quickly puff them up and/or blow into them before snapping a shot with a wireless shutter release.

Each sea creature was captured by itself, so post-processing involved stitching the images together and color matching them in Photoshop.

As we have written before, plastic that finds its way into our oceans poses a huge environmental threat since plastic does not biodegrade – plastic photo degrades with sunlight and breaks into smaller and smaller pieces but never fully disappears. Some estimates have found that approximately 90% of all trash floating on the ocean’s surface is plastic. That’s 46,000 pieces of plastic per square mile! As a result, plastic is consumed by marine life, washes up on beaches, and breaks down into microscopic plastic dust which attracts more debris.

Unfortunately, there is no sign of a decline in plastic concentration in the ocean. A new study by University of British Columbia researcher Stephanie Avery-Gomm found that the stomach content of seabirds (which inadvertently consume twine, candy wrappers and Styrofoam) suggests that there has been an increase in plastic pollution in the last four decades.

While this study, published online in the journal Marine Pollution Bulletin, looked at plastic pollution off the Pacific Northwest coast, the results are not much different from the study conducted last year of the polluted North Sea.