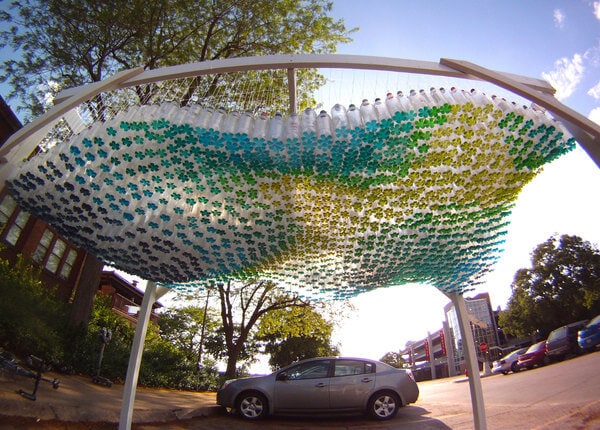 American artist Garth Britzman has collaborated with University of Nebraska students to create a piece titled (POP)culture, made of plastic. The endeavor took 200 hours to make and is a temporary installation.

“This temporary installation used recycled soda bottles as a canopy under which a small park is created. An intriguing environment is created where one can explore the surface qualities of the bottles at eye level,” says Britzman in a statement. “Additionally, this project sought to stimulate creative alternatives for recycling and reusing materials.”

Plastic finding its way into our oceans poses a huge environmental threat since plastic does not biodegrade – plastic photo degrades with sunlight and breaks into smaller and smaller pieces but never fully disappears. Some estimates have found that approximately 90% of all trash floating on the ocean’s surface is plastic. That’s 46,000 pieces of plastic per square mile! As a result, plastic is consumed by marine life, washes up on beaches, and breaks down into microscopic plastic dust which attracts more debris.

Unfortunately, there is no sign of a decline in plastic concentration in the ocean. A new study by University of British Columbia researcher Stephanie Avery-Gomm found that the stomach content of seabirds (which inadvertently consume twine, candy wrappers and Styrofoam) suggests that there has been an increase in plastic pollution in the last four decades. While this study, published online in the journal Marine Pollution Bulletin, looked at plastic pollution off the Pacific Northwest coast, the results are not much different from the study conducted last year of the polluted North Sea.

Related:   The Reality of Bioplastics - Do They Help You Live a Greener Life? (Part 3/3)

Avery-Gomm and her team collected and conducted necropsies of 67 beached gull-like seabirds between October 2009 and April 2010 from the coasts of B.C., Washington and Oregon. What did they find?  Ninety-three percent of them had bellyfuls of plastic. In fact, one particular bird has 454 pieces of plastics in its gut.

The findings of the study show that ocean pollution is on a rise since the first study of plastic ingested by birds was conducted in 1980 (south of the Alaska Peninsula by the University of Alaska) found that 58 percent of the birds had consumed plastic. While 58 percent is no small number, it is significantly smaller than the current statistic of 93 percent. The increase wasn’t just seen in the number of birds consuming plastic: The mass of plastic that was consumed also increased from 0.04 grams in 1969-1977 to 0.385 grams to about 800 grams found in the current study.

These findings suggest that plastic pollution needs to be monitored on a regular basis and people need to be aware of the environmental and long-term effects of littering and what they’re throwing out. Avery-Gomm, the study’s lead author and graduate of the university’s zoology department, told TK:

“This highlights the need for a reliable, internationally standardized method of monitoring trends in plastic pollution. It would be totally feasible to have a Canada-U.S. collaborative effort where people in Alaska collect fulmar there, we collect fulmar here, Washington and Oregon and California all collect their fulmar and we all dissect them according to these internationally standardized protocols and compare results. That’s what they’re doing in the North Sea.”