Animals are the most untapped source of inspiration on our little blue planet.

And although PBS’s “Nature” series often provides us with opportunities from which to admire the strength, fortitude, courage and dedication that animals exhibit on a daily basis, a recent episode called “My Bionic Pet” allows us some needed pride in our own species for our remarkable abilities to help others.

“My Bionic Pet” profiles a few non-humans lucky enough to be part of a growing trend in applying prosthetics on disabled animals.

Crisp P. Bacon, a pig born with deformed back legs whose owner sought to euthanize him at only a day old, is perhaps one of the luckiest pigs on the planet.

While most humans are mindlessly devouring his kindred on their McMuffins the world over, Crisp P. was adopted by Len Lucero, the vet who was supposed to have ended his short life because of his deformity.

“He is an inspiration, a fighter and one heck of a good friend,” Lucero said, sporting the kind of shining smile that only comes from being touched by the spirit of an animal. “Never once have I regretted [taking in Crisp P.].”

Happy as Crisp P. seems dragging his back legs around as he follows Lucero, there’s a simplicity in his lust for life you can’t help but somewhat envy as he bounds through the grass after being strapped into his custom-made wheel chair.

Then there’s Molly, a pony who survived Hurricane Katrina on her own in New Orleans only be to be attacked by a pack of starving dogs who mangled one of her front legs to the point that it had to be amputated.

Growing up on my grandma’s favorite Westerns, I was led to believe that the only thing to do with a horse with a bad leg is shoot her. And that may have been the case in those days as horses develop a deadly condition called laminitis when all of their weight is forced upon the remaining three legs.

But it seems all our ingenuity does not necessarily have to be leading us down the path of world destruction.

When coupled with compassion, which we share with many creatures on this planet, our unique innovations and opposable thumbs could actually be offering us a choice down the road less taken.

Molly made it through amputation surgery and was fitted with a prosthetic leg shortly after, now living out her days as a source of inspiration for the disabled children who regularly visit her and learn her story of survival. 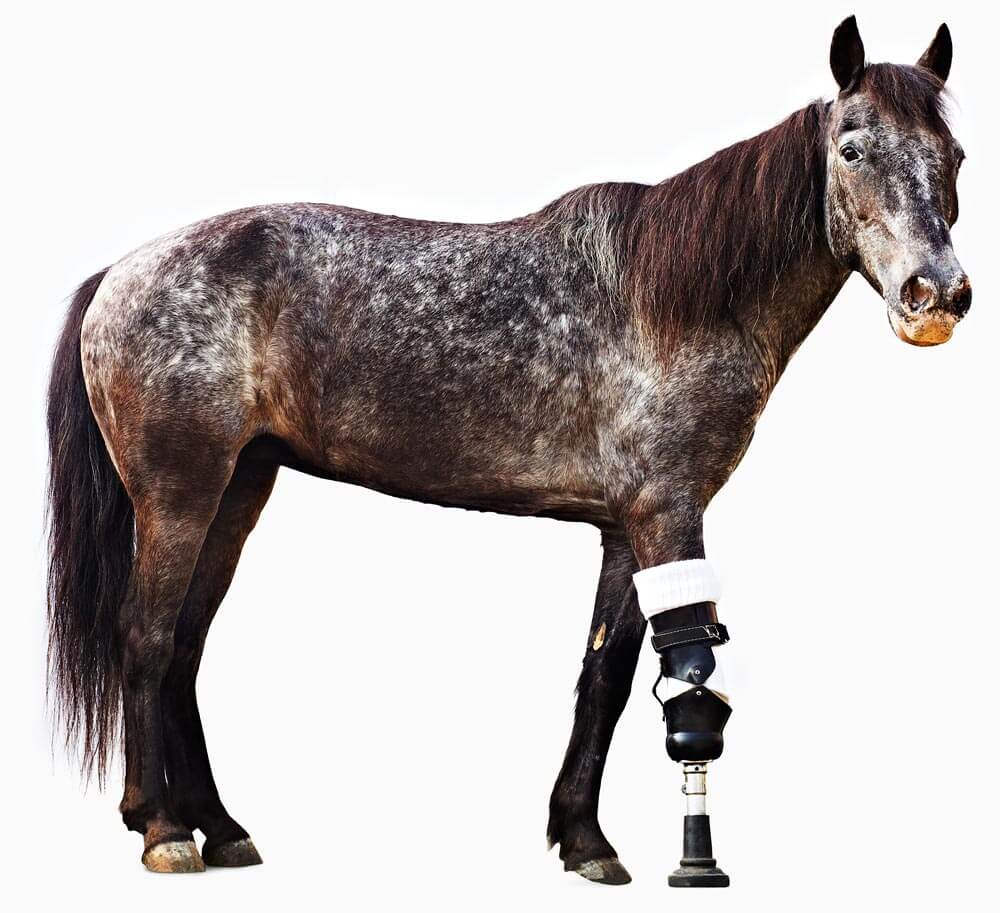 And like Crisp P., there’s no evidence that Molly is afflicted by the human malady of self pity.

While butterflies for what the world could be tickled my stomach throughout the show, which also featured a happy blind dog with barely any front legs to speak of, a llama, an alligator missing a tail and a swan who held his head in gratitude in the arms of the vet who reconstructed his badly damaged beak, what finally brought me to tears were the final few moments of the show.

A young dog whose back legs had been nipped off by his overzealous mother just after being born was shown taking his first steps with two prosthetic legs after a short life of dragging himself around his caretakers’ home.

Expecting the dog to at least sniff or investigate the sticks the humans strapped to his legs, I was surprised to see this little guy bound through the grass with more zest for doing what dogs do than the majority of us exhibit even on our best of days.

Watching him experience the simple joy of running and jumping was perhaps one of the most beautiful reminders of why life means so much to every being lucky enough to burn with that magic energy.

I suppose out of obligation the show does detract from what makes being human such a magnificent blessing by addressing that blindly selfish inclination to chastise those helping others who live differently than themselves.

Unfortunately, although the program doesn’t ignore the obvious philosophical question — why give extraordinary aid to animals when people have so many unmet needs? — it never addresses costs, the same issue that bedevils human health care as the possibilities for treatments and interventions expand. Good intentions are swell, but you’re left wondering how many animals can realistically be helped, and at whose expense.

Intention is everything, and good intentions mean the difference between creating a world worth living in for all creatures, and racing down the same path of apathy and ignorance we are currently set upon.

Unfortunately, we are that powerful. And how we use that power is up to our intentions.

When we ask questions like this I think it is just as significant to ask questions like why is it acceptable for people to spend their money on a yacht instead of feeding starving children? People who help animals are more heavily criticized than those who don’t help anyone.

Related:
Should Dog Meat Be Outlawed in Vietnam? Maybe Not

Criticism of purely good intentions is a symptom of Fear, just like violence is a mark of the undead.

There’s no being in nature capable of helping others like we can. To help others is to feed the divine. And all of those going to such lengths to help these “bionic” animals shined with that beauty, and they seemed truly alive.

You can watch the entire episode here.

This video, from Edgar’s Mission Farm Sanctuary, is another example of the potential magnanimity of our failing species. Actions like these are our only hope, and, of course, “hope is a good thing, and no good thing ever dies.”