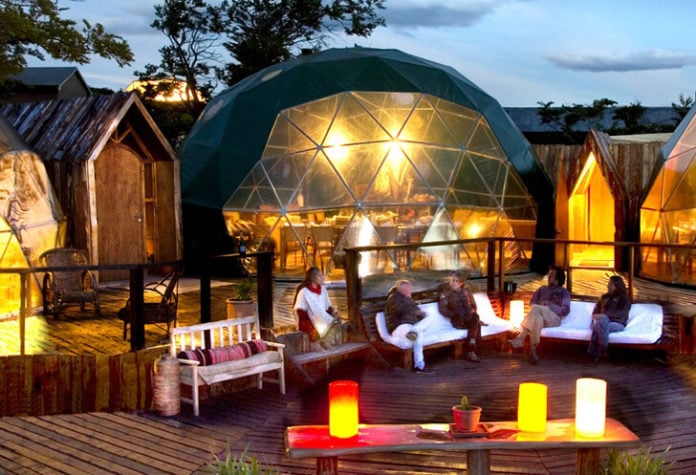 Where does EcoCamp’s electricity come from?

EcoCamp’s electricity is comprised of hydro and solar power. Hydro power makes up 60% of EcoCamp’s energy and comes from a river on one side of the property. The other 40% comes from 1700 watt photovoltaic panels, which are particularly effective in summer when Torres del Paine receives 17 hours of daylight.

How does the hydro & solar energy get converted into electricity?

Water from the river enters a micro-hydro turbine at 5 litres per second, with a net pressure of 38 metres, delivering a steady power of 800 watts. The energy is stored in a series of battery banks at 24 V DC, which is then converted to 220 AC (standard voltage in Chile). The energy harnessed by the 1700 watt photovoltaic panels is also stored in the battery bank and converted. Then EcoCamp guests just plug their electronic items into the mains!

Is there an infinite supply of electricity?

Regrettably no. Like most green energy operations, EcoCamp’s energy is limited. The electricity supply is sufficient to power fridges, kitchen appliances, radios, lighting in Suite Domes (Standard domes have no electricity) etc. Cell phones and camera batteries can be charged in Suite Domes and Community Domes. No hairdryers or electric razors can be used as these require very large amounts of energy and can cause power cuts.

Why does EcoCamp use renewable energy?

EcoCamp’s whole philosophy centres on leaving no trace behind in the Patagonian wilderness. EcoCamp was designed and constructed to have the most minimal impact possible on the environment and this means low impact domes, raised walkways, composting toilets and green energy. All other hotels were using diesel as a fuel when EcoCamp’s founders came to the park, and they wanted to find a sustainable alternative which wouldn’t damage the park’s environment with pollution.

The founders themselves! Both engineering graduates from Chile, EcoCamp’s geodesic dome design was sketched by founder Javier Lopez while its green technology was designed and installed by founder Yerko Ivelic. Together with a team of workers, Yerko set about implementing and testing sustainable technology features he and Javier had seen across the world, bringing them together to make Patagonia’s first sustainable hotel. Yerko ensured the flow of water to the micro hydro turbine and bought the battery banks and the converter, adding energy from the solar panels, and making sure the delicate system afforded EcoCamp with all the electricity it needed. Javier and Yerko remain owners and managing directors of EcoCamp today.

What are EcoCamp’s other sustainable features?

Apart from its low impact design (EcoCamp relocated within Torres del Paine National Park in 2005 without leaving a trace behind) and green energy, EcoCamp hosts the world’s southernmost composting toilets! All toilets at EcoCamp have chambers which collect waste and are heated to ensure the compost process is active in the cold Patagonian weather. In addition EcoCamp offsets all of its carbon emissions – which are minimal due to its use of renewable energy – and engages in careful recycling of all materials used. Last year EcoCamp pioneered a shower water heating system, designed to initially heat all water going into EcoCamp’s shared bathrooms, ensuring only a minimal top up from propane gas is needed