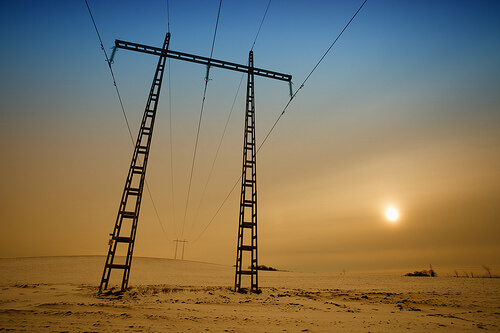 At the beginning of August 2012, the world’s biggest power outage hit India leaving 600 million people without electricity. India’s burgeoning electrical grid failed to meet the extreme demands of its growing economy. They simply did not have enough capacity to meet the high demand of electricity in cities. The power outage threw the urban areas of the country into chaos, while life continued relatively the same in more rural settings. It seems that people in rural villages were able to get along more easily without the grid in part because they weren’t hooked up to the grid, but also because they had their own home solar power kits.

Yes, farmers in rural parts of the 20 states of India that were without power during this outage were able to keep their irrigation pumps and lights on. This small miracle, the results of solar power panels installed on rooftops and in fields across the countryside.

Setting up even one or two solar power panels can help keep you from ending up in the dark. While this power outage occurred far from your city, it was the result of too much demand on the power grid. The same kind of occurrence can happen in any place where holidays, extreme heat and celebrations can lead millions of homes to draw too much power from the grid, forcing it to shut down.

Getting a power panel installed on the roof can also help cut costs on a daily basis. Use it to heat the water in the water tank, provide part of your daily electrical requirements, and even save power in batteries for future use. Most people are hesitant to invest in solar panels because of the high initial cost. However, there are several ways to cut these costs using tax deductions and discounts from solar power manufacturers. In the long run, the solar panels end up paying for themselves in the electrical costs they save the homeowner.

Power was restored to 80% of those 600 million people in India within the same day. However, even this short period of time without electricity should be a warning to all that a backup source of power is essential to avoid being left in the dark. Solar power panels, wind power, geothermal energy and more sources of energy are all excellent ways of providing power while staying off the grid, or even in addition to using the grid.