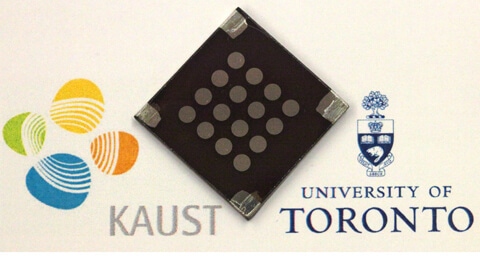 Quantum dots (also known as nanocrystals) have certain electronic properties, which we can use to convert photons (light particles) into electricity in much the same way as with traditional solar cells.

Quantum dot solar cells films, are usually built up by much more inexpensive material if compared to crystalline- or thin film silicon, which is what you`ll find in today`s solar panels.

A team of researches from the University of Toronto (U of T) has now pushed the efficiency threshold of colloidal quantum dot (CQD) films to 7%, a 37% increase compared to previous record holding prototype.

“Previously, quantum dot solar cells have been limited by the large internal surface areas of the nanoparticles in the film, which made extracting electricity difficult,” said Dr. Susanna Thon, a lead co-author of the paper. “Our breakthrough was to use a combination of organic and inorganic chemistry to completely cover all of the exposed surfaces.”

“Our world urgently needs innovative, cost-effective ways to convert the sun’s abundant energy into usable electricity. This work shows that the abundant materials interfaces inside colloidal quantum dots can be mastered in a robust manner, proving that low cost and steadily-improving efficiencies can be combined.” Said U of T Engineering Professor and head of the research team, Ted Sargent.

7% is not a lot compared to monocrystalline silicon solar cells, which now has been around for several decades, and can have efficiency rates several times this number. However, if we take costs into account, the research team`s new progression is indeed a breakthrough. There is a lot of promise with quantum dot solar cells. Let`s hope it doesn’t take too long before they are brought onto the market and helps bringing the cost of solar panels down.