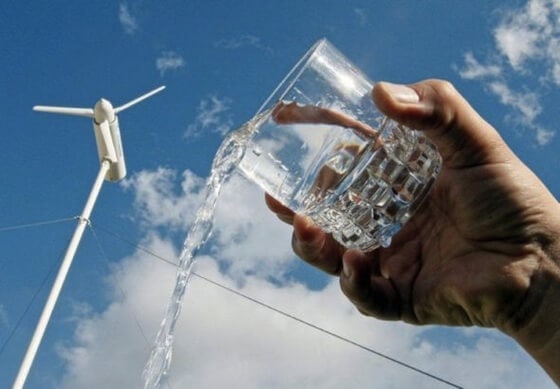 Breakthroughs in water filtration and wind turbine research have fused together to create an innovative machine that may very well change the landscape of third world countries for the better. The WMS1000 Wind Turbine, created by an eco-energy company named Eole Water, uses wind power to create an entirely autonomous water filtration system.

What is unique about Eole Water’s wind turbine is that it is not used to generate usable electricity for citizens. The 30 kW of energy that it generates is used to power a cooling compressor (similar to the ones used in air conditioners), essentially drawing water vapor from the air around it. As the vapor condenses into actual water, it is run through a water filtration and purification system, also powered by the turbine. Made of a steel alloy, the system ensures safe drinking water with minimal corrosion, reducing the need for maintenance. 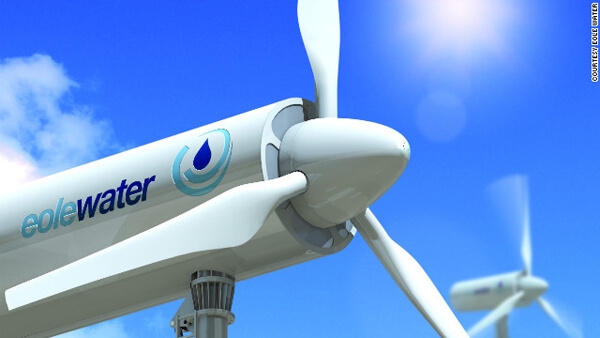 They designed the machine for autonomous production with minimal maintenance so that it can be placed in most environmental conditions and still produce a stable supply of drinking water. The overarching goal of the company is to supply these water-generating turbines to third-world countries where even fresh drinking water is a problem for citizens. The versatility of the WMS1000 allows it to generate water in even the most technologically isolated community.

The WMS1000 is currently being used in Abu Dhabi with much success, generating between 600-700 liters of fresh drinking water every day. Currently, tests are being run to remove problems associated with sand, salt, and pollution from the system.

Of course, Eole Water’s wind turbine is not perfect. It carries some of the faults that more traditional wind turbines have, such as aesthetic appeal (more traditional countries may see its modern look as a sign of western encroachment) and potentially causing Wind Turbine Syndrome (it uses the same parts that regular turbines use to generate electricity). One of the most important faults that the WMS1000 has so far is its cost – it is still too expensive to be marketably produced in most third-world countries.

However, these faults are overall quite small for what it does. Fresh drinking water is a necessity that, unfortunately, many impoverished countries cannot give to all of their citizens. With international funding and further innovations in wind turbine and water filtration systems, this technology could very well be the first step to supplying all citizens with clean drinking water.