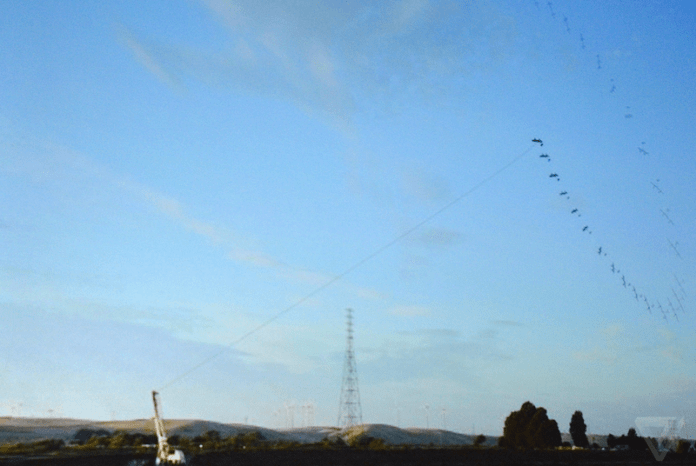 Google will fly an 84-foot wind turbine next month as part of an ongoing experiment with wind energy.

The turbines, or energy kites as they’re called by Google’s Makani division, are closer to planes than they are traditional turbines.

Here’s the Verge’s Arielle Duhaime-Ross with the details:

They’re more like “planes” equipped with eight propellers that are tethered to a docking station. When they’re released, they get up to 450 meters in the air. At that altitude, the plane starts doing large circles in the sky, which turns the plane’s propellers. The drag turns each of the eight propellers into individual turbines that send 600 kilowatts back down to Earth.

The flight next month will be Google’s largest so far. They’re current tests have been limited to 28-foot prototypes, which, despite the team’s best intentions, have yet to crash.

Spreaking to a crowd at SXSW last week, Google’s Astro Teller said of the project “Larry Page said to me, ‘make sure you crash at least five of those test versions.’ What he meant was… if you’re not breaking your experimental equipment, at least some of the time, you could be learning faster. And I know he’s right.”

Check out more on the story over at The Verge, or visit the Makani website for more information.