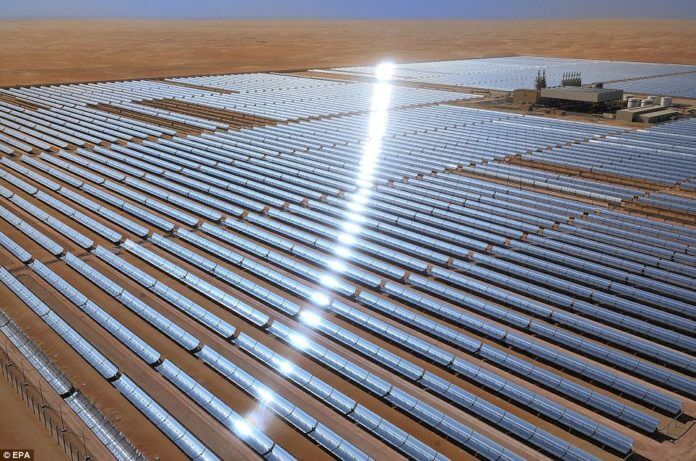 The United Arab Emirates has opened the “largest concentrated solar power plant in operation anywhere in the world” in Abu Dhabi with their 100-megawatt solar-thermal project, according to Daily Mail UK. This $600million project—which took three years to complete—is believed to have the ability to power 20,000 homes in the country and in turn, reduce carbon emission by 175,000 tons.

“Incorporating the latest in parabolic trough technology, the plant features more than 258,000 mirrors mounted on 768 tracking parabolic trough collectors, covering an area of 2.5 sq/km, or 285 football fields,” writes The Daily Mail UK of the project. “By concentrating heat from direct sunlight onto oil-filled pipes, Shams 1 produces steam, which drives a turbine to generate electricity. In addition, the solar project uses a booster to heat steam as it enters the turbine to dramatically increase the cycle’s efficiency.”

And because solar power is generated during peak demand the UAE is able to reduce the need for ‘peak shaving’ generators, which are expensive and idle most of the year.

“The Middle East holds nearly half of the world’s renewable energy potential,” said Santiago Seage, CEO of Abengoa Solar, an energy infrastructure company that built the plant. “The abundance of solar energy is an opportunity to integrate sustainable, clean sources of power that address energy security and climate change.”

“The region needs more projects like Shams 1, and we look forward to pushing the boundaries of future energy.”