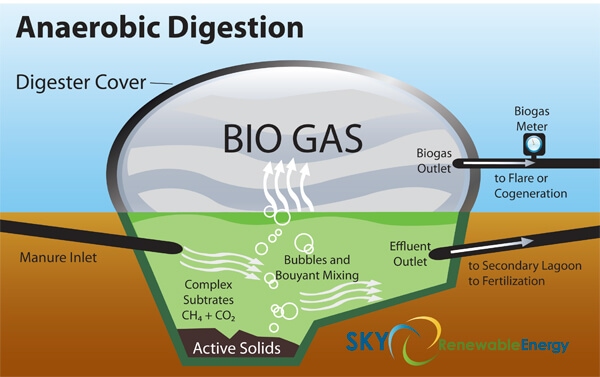 Anaerobic digestion is turning cow – well you know – dung – into environmentally-friendly energy to heat and power your home.

Actually, anaerobic digestion is turning your dung into renewable power too.

As the whole process uses natural organic matter to generate gas, anaerobic digestion systems are commonly called “biogas systems.” The biogas they create can be combusted to produce electricity and heat, burned in a boiler or furnace, or cleaned and used as a natural gas replacement.

If using micro-organisms to create natural gas sounds familiar, you’re right. It is the same fermentation process used to make many of our food and drink products, such as wine and cheese. If you’ve ever made your own wine, you’ve used a form of anaerobic digestion.

Farmers across the globe are using anaerobic digestion to turn their organic waste into electricity to power their farms, and to heat their homes. Some generate so much power, they earn additional revenues from selling the excess power to their utility company. A pleasant side effect of tossing their animal manure into the anaerobic digester is a reduction of the smell of manure on the farm – as it is being collected and broken down in an air-tight system.

Oh, and your waste is being used to generate renewable green energy too.

Municipal water treatment plants use anaerobic digesters to break down sewage sludge and eliminate pathogens in our wastewater.

Anaerobic digesters capture methane from our solid waste too. Municipalities sort organic solid waste into different streams, such as food waste, yard waste and soiled paper, to prevent clogging of the pumps due to the large volume of these waste streams. Each separated waste stream is diverted into its own anaerobic digester, which breaks down the organic matter, while generating biogas which may be used for electricity and heat.

Food and drink processing plants use anaerobic digestion to turn the waste left-over from producing what we consume into renewable energy and heat, which often is enough to run the food processing plant.

The biogas generated by anaerobic digestion can also be collected and used to power natural gas vehicles, and piped into municipal natural gas systems to heat homes and businesses.

Impurities in the biogas such as sulphur, sulfides, carbon dioxide, nitrogen and oxygen are removed using a filtration process called “scrubbing.” Then the cleaned natural gas is compressed to meet the pressurized requirements of its use:

Anaerobic digestion use to turn waste into renewable energy is growing across the globe.

In Lowell, Michigan, using anaerobic digestion has turned one person’s waste into another person’s treasure, literally. Entrepreneur Greg Northrup has privately raised the $6 million needed to build an anaerobic digestion facility. About 80 percent of the plant’s fuel will be used cooking oil and grease from local restaurants, giving a new environmental use for the local greasy spoon. The facility will generate 800 kilowatts of renewable energy, which will be sold to area residents and businesses.

In Canada, there are large-scale anaerobic digestion facilities in Ontario, and British Columbia, with other provinces planning to get into the game.

China may be the world leader by the numbers, with an estimated 8 million anaerobic digesters, while Nepal has 50,000.

The United Kingdom is growing its anaerobic digesters. GTS Nitrogen Services has been helping businesses plan, develop and build anaerobic digestion facilities in the UK. With over 35 years of experience, they have been turning waste into green energy, and reducing our dependence on fossil fuels.