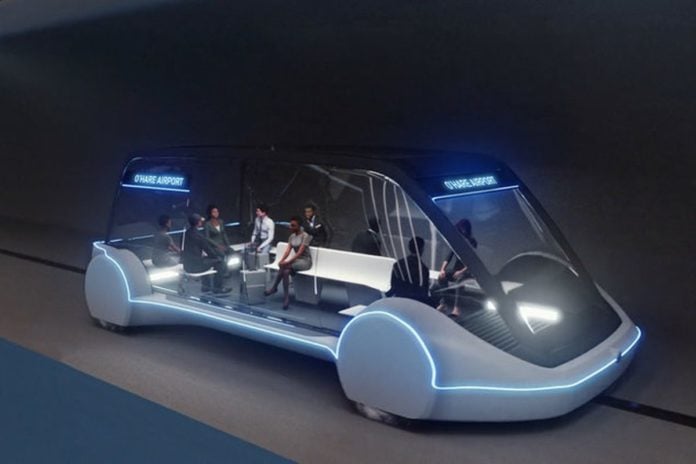 The company (which specializes in underground transportation) is constructing an underground tunnel connecting downtown Chicago with one of the world’s busiest airports, the O’Hare airport with a railway line.

The high-speed transit will be traveling at 125-150 mph, and within 12 minutes you will be at the airport.

The current blue line trains traveling above the grounds take almost an hour from downtown Chicago to O’Hare international airport.

If this tunnel is actually built, which Musk refers to as “loop,” it’ll be a significant achievement for the city of Chicago.

According to The Boring Company, the 8-wheeled vehicles will operate 20 hours a day, seven days a week, and every 30 seconds there will be a vehicle departing from a particular station.

In short, there will be a vehicle available all the time.

We have no word about the exact cost of the project, but we know that Elon Musk is footing the bill.

In return, The Boring Company will pocket all the revenues raised through whatever means by the underground transit. Early estimates have revealed that the rides will cost approximately $20 -$25 per trip, which is half the price if you use Uber.

Comparing with Musk’s estimate about Los Angeles, you would wonder why so much difference.

The LA transit, according to Elon Musk, would cost roughly $1 per person, per trip.

The prices could, however, change because nothing has been done yet. The time frame is not even known. Everything about the underground transit is just but a concept, and The Boring Company has not started real work yet.

Currently, Boring has been digging the Los Angeles tunnels, and according to the company, these tunnels are smaller than ordinary tunnels, and so the cost could be a little bit less.

The revealed concept video clip of the transit shows zero emissions, and Tesla batteries will power the vehicles. Musk used the word “skate” to explain how the cars would move on the rail lines.

The underground cars resemble Tesla Model X, the SUV that has received a five-star rating in safety concerns from NHTSA in all categories.

The cars are made with climate controlled cabins explicitly designed for Chicago due its severe cold winters. It has luggage storage and Wi-Fi connection.

Chicago’s Mayor Rahm Emmanuel said that he prefers Musk due to his efforts and achievements, terming him as a man who doesn’t like to fail.