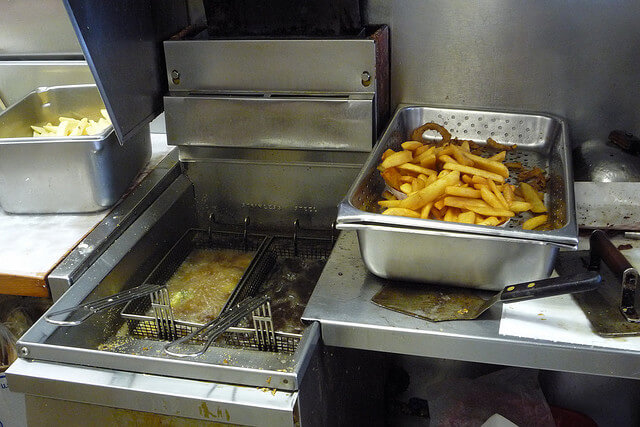 Grease is often a necessary part of cooking. It comes out of many animal based foods as they are prepared, it is used to prevent foods from sticking to cooking pans, and it is used to flavor particular foods. Restaurants, which produce enormous amounts of food each week, are known for also producing a large amount of grease. Unfortunately, unless this grease is properly contained and disposed of, it can cause damage to pipes and the general water supply. Grease is known for causing clogs when it hardens or getting into bodies of water, such as ponds, and causing major difficulties for wildlife. Grease traps are essential for preventing this pollution and keeping waterways clear.

Here is some background on the amount of grease that fast food restaurants alone are able to produce through regular business activity.

How much grease is produced by fast food restaurants?

Fast food restaurants are believed to produce an average of 150 to 250 pounds of grease per week, or up to 1000 pounds per month or 13,000 pounds per year. This amount of grease can become overwhelming to contemplate when one considers that there an estimated 160,000 fast food restaurants throughout the United States serving an estimated 50 million people daily. Without grease traps, Green Turtle oil separators and proper grease disposal, it is easy to see how the thousands of pounds of grease could potentially become a major pollutant and problem for the water system.

Where does all of the grease come from?

The waste grease that emerges from fast food restaurants comes from a variety of sources. To begin, most fast food restaurants serve either meat or fish as their primary entree. Whenever meat is grilled, fats and oils will be released from the meat as a natural by-product. If the meat is fried, then even more grease is produced because it is also added to the dish to cook the food. The grease is also used to cook common side dishes, such as french fries and onion rings, both of which are also fried in large amounts of grease.

Fast food restaurants that cook foods such as pizza will produce grease when they are baking the pizzas because cheese, as another animal based product, will also release oils when heated. Between pizza, french fries, onion rings, and meat, nearly all of the foods commonly sold as staples at fast food restaurants will result in waste grease after they are prepared. Even when not produced directly from the food itself, grease is commonly used in most cooking facilities to prevent food from sticking to cooking pans and fryers.

How should the thousands of pounds of grease be kept from the water system?

All restaurants are supposed to have grease traps to comply with regulations. These traps on common waste disposal systems to trap the grease that will then be disposed of later. Once the grease is trapped, restaurants are expected to dispose of it each day is separate waste containers for it to be removed properly. Facilities are also liable to inspects to make sure that the regulations are followed. In restaurants that produce such as large amount of waste grease, such as fast food restaurants, compliance with these standards is especially important.