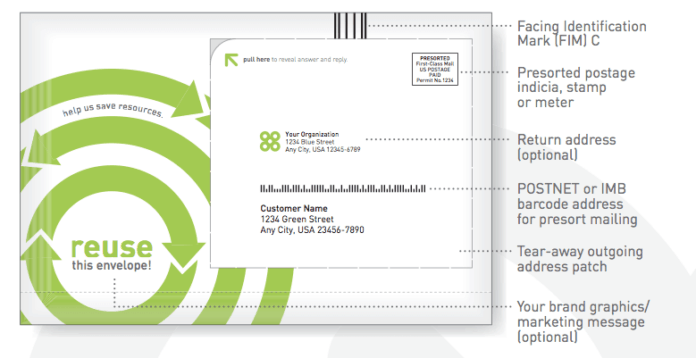 Cellphone company Sprint recently announced that they would be transitioning from the traditional envelope to the patent-pending ecoEnvelope when it comes to billing their customers. The ecoEnvelope has is made out of sustainable materials include certified paper, inks and window films that have been manufactured with attention to how they impact on the environment. Formatted a lot like the Netflix DVD envelope, the ecoEnvelope, will also have an envelope for customers to send checks back to the company.

The shift to ecoEnvelope was part of Sprint’s broader commitment to responsibly procure printing paper as reflected in its recently updated Paper & Print Procurement Policy. The policy highlights Sprint’s commitment to support sustainable forest management, work with environmentally and socially responsible suppliers, purchase paper with more recycled content, and optimize its paper use.

Sprint shares, courtesy of data from the Environmental Paper Network Paper Calculator, that the change in envelopes their company makes will save an estimated 447 tons of paper and $500,000 in operating costs in the first year. What does that mean? In terms of carbon dioxide, it is the equivalent of taking 244 cars off the road. With such significant benefits to the environment, one can only hope that other cell phone carriers (translation: competitors of Sprint) will follow suit and switch over to a greener envelope for billing their customers.

Related:   Microsoft HQ Switches to 100% Recycled Paper, to save 8000 trees per year

So how bad are traditional envelopes? According to data shared by Minnesota-based EcoEnvelopes, from data shared by the Center for Environmental Innovation, for every million EcoEnvelopes used 23 tons of wood are saved, 249 billion BTUs of energy are saved, 123,989 gallons of water is conserved, 14 pounds of hazardous pollutants are avoided and 36,986 pounds of greenhouse gases are avoided. It’s hard to argue against ecoEnvelopes with those staggering statistics.

While ecoEnvelopes are a great alternative for the traditional envelope, the real (and fastest) way to make a difference is to opt for online billing, which requires no paper whatsoever. After all, going paperless can save 150,939,615 pounds of paper (and, in turn, save 1,811,275 trees), prevent producing almost 2 million tons of greenhouse gases, avoid creating more than a billion gallons of waste-water during paper production and steer clear from using more than 100 million gallons of gas to mail payments.

Unfortunately, that day may not come any time soon: Forrester Research found that a mere 24 percent of bank customers have gone paperless and that more than a third of people surveyed claim they never will. Until that day comes when online billing becomes the accepted and trusted norm, this measure of green envelopes is most certainly the lesser of the two evils.