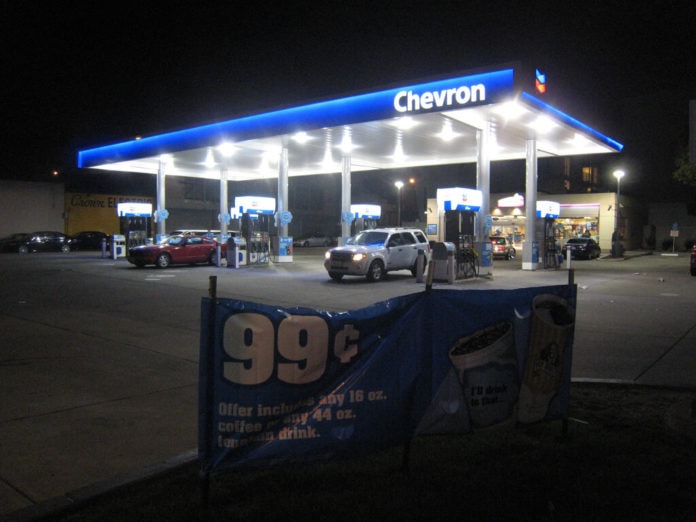 Chevron is known for being one of the biggest multinational fuel organisations in the world, ranked America’s third largest corporation in the Fortune 500 from 2007-2012. Chevron sources traditional energy sources, oil, natural gas and oil sands, as well as renewable geothermal and solar energy.

In 2007, Chevron helped to write out a bill to cut carbon emissions from trucks and cars, this was in conjunction with the EPA (United States Environmental Protection Agency) and the state of California. Since this time Chevron has gone back on its word and is now lobbying a campaign to amend the Californian mandate, which is in place to help reduce global warming.

Chevron is not the only company to go against the Californian mandate, with ExxonMobil Corp., the USA’s largest oil company, also withdrawing its efforts to strive towards producing biofuels. Reports state that the companies, although they helped write the mandate, are now claiming that the technologies required for implementation of the Californian rule are too advanced and could cost millions, therefore pushing up petrol pump prices, if they aren’t amended.

The ‘Low-Carbon Fuel Standard’ (LCFS) aimed to reduce the amount of carbon within its transportation fuels, fossil fuels and natural gases. The ‘California Air Resources Board’ outlined the proposals for this mandate back in April 2009, however it didn’t come in to affect until January 2011. The standards set out by LCFS requires companies such as Chevron and other oil refineries (and distributors) to reduce the amount of carbon in their fuel mix by 10 per cent by 2020.

‘Chevron was optimistic when it worked on the low-carbon fuel standard with Schwarzenegger’s team in 2007’ said Desmond King, president of Chevron Technologies. Chevron tried to put in to practice its wood replacement program for gasoline but found this method wasn’t ‘commercially viable’.

This leads us on to ask the question, ‘what do we expect from our energy suppliers?’ Many of us own a vehicle and commute on a daily basis but would we change the way we travel in light of scientific findings that gas omissions are contributing to global warming? Many people would be unwilling to change their travel patterns due to the pace of modern life and the inconvenience it poses. It would seem therefore that the responsibility lies on the manufacturers and distributors to put in place a plan to reduce the carbon in their energies to bare minimum; including investing in and producing renewable energy, where possible.

Saying this, there are a number of responsibilities we must take upon ourselves to assist in the process of reducing harmful omissions. Individuals can reduce the number of journeys taken by car or car share where possible. Companies can put in place a management scheme for their fleets to monitor the cost and amount of fuel used by their vehicles.

The EPA is working hard to ensure that energy manufacturers are thinking about the future of fuel and not just the bottom line, with programs such as the ‘Renewable Fuel Standards’.  At present Chevron is still investing in the development of biofuels, but it’s likely they won’t be meeting with the carbon reductions as set out by the LCFS.

“We remain interested in the solvent liquefaction technology but, like other biofuel production technologies, it is early in its development, and we’re still learning about it,” said Crinklaw, the company spokesman. “Unfortunately, the technology hasn’t advanced as quickly as we’d hoped,”

We live in hope.