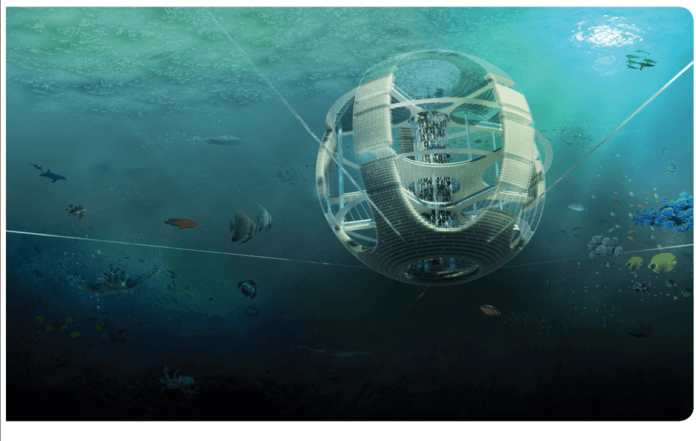 eVolo Architecture Magazine’s 2012 Skyscraper competition entrants from South Korea developed the conceptual Plastic Fish Tower—an underwater ocean structure designed to ‘attract’ plastic in an effort to reduce the concentration of pollution in the Great Pacific Garbage Patch. A “floating fence” around the tower would provide a protective dome for the internal spherical structure, which would then accommodate human residents on its inner under and above-water sections. A processing plant in the sphere’s core would turn residents’ trash into fish-farm nets.

A Serbian design team proposed Lady Landfill Skycrapers for the same contest– “oceanscrapers” that would be built on underwater landfills, with trash collecting and recycling operations happening in the building’s lower core. Ocean water would run inward to a system counterbalancing the structure’s bulk of plastic trash in the hulls, allowing for it all to float successfully while supporting human residents right above the water line.

Self-sustaining, life-supporting sea structures are their own exciting industry—and one with unlimited growth potential, as we search out ways to deal with both endless rising trash and ocean levels. There are already a growing number of habitats and “eco resorts” around the world that serve ecological functions and form a bridge towards the ideal: architecture that is not only eco-focused but essentially nixes out its own footprint by in part recycling, reusing and converting its waste into energy.

A rather high at-risk region for rising sea levels, Australia, held a “Now + When Australian Urbanism Exhibition“ to explore creative solutions for the future. ‘Ocean City’ or ‘Syph’, designed by Arup Biomimetics, proposes a solution for when “land begins to disappear and the value of what remains sky-rockets, and people are unable to afford living on land. (Inhabit.com)

Related:
Take pressure off the oceans by eating sustainable seafood

This conceptual self-sufficient floating mini-city proposed by Sarly Adre Bin Sarkum as a “Water Scraper” uses solar, water and wave energy to generate electricity to support residents, aquaculture, farming and hydroponics. The surface of the submerged skyscraper sustains a small forest, while the lower levels contain spaces for people to live and work. The building stands using a system of squid-like tentacles that not only keep the structure upright, but generate kinetic energy. (Inhabit)

Visit eVolo for information on 2012 competition winners as well as entry requirements for 2013.