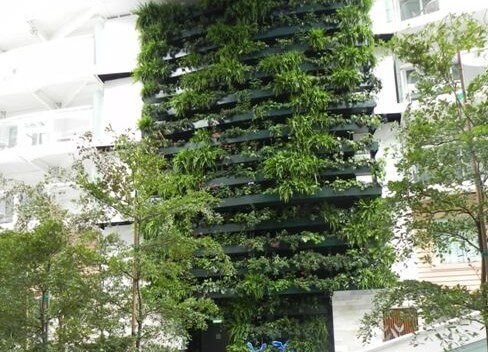 Green walls, or vertical gardens as some know them, are a stunning feat of botany and engineering that have been blooming in popularity since their conception. Habitually adorning the sides of five star hotels, museums and galleries, new practices are allowing the erection of vertical gardens virtually anywhere – indoors or outdoors – as long as you have a spare wall!

However, although they may look opulent, green walls aren’t just there to make a statement. As any gardener, plant-lover or eco-friend will know, foliage has a far deeper effect than simple pleasure from looking at something aesthetically pleasing.

Oxygen and the World

It’s a well known fact that plants absorb CO2 and produce oxygen, but it is less obvious what effect this has on the surrounding area. A 50m2 patch of grass can produce enough oxygen for one person, so imagine the extra oxygen that a green wall on the side of an eight-storey building will produce. This is especially astounding when you consider that the plants in a green wall will have leaves with a larger overall surface area than blades of grass.

As we all know, levels of vegetation across the world are depleting along with CO2 emissions rising, causing higher CO2 levels in our atmosphere and the hole in the ozone layer, which has resulted in global warming. The development of more and more green walls is fantastic, as it allows vegetation to thrive in places that it otherwise could not. Green walls make use of vertical space in concreted areas that would otherwise be completely foliage free, save from a pot plant on a balcony or a tree on a street corner.

Although green walls will not make up for deforestation and rising CO2 emissions alone, a significant increase of them in urban areas – both existing and the ones that will be established with our growing population – could help to at least curb the drastic impact of more and more CO2 in our atmosphere.

Ever wondered why cities are typically warmer than the countryside? The Urban Heat Island (UHI) effect is the rise in temperature that occurs in built-up areas as sunlight and heat are reflected off the glass and metals that make up most buildings. This amplified heat is then absorbed and retained by the dark materials that cover urban areas like concrete, brick and tarmac.

This can be especially significant in cities during the summer, and the effects are most evident at night after a day of sun, as buildings block the heat built up in the day from radiating back into the night air.

A direct effect of this is that electrical methods of indoor heat reduction, namely air conditioning, are used more frequently and for longer periods of time, in turn resulting in higher CO2 emissions, which raise temperatures. And on goes the cycle.

Introducing a good amount of vegetational cover to urban areas that experience this, for example with green walls, can have a significant impact on the UHI effect as the plants absorb excess heat and don’t contribute to sunlight reflection.

Green walls also provide excellent insulation to the buildings they adorn, ensuring that the buildings retain heat in cool weather, and remain cool in warm weather. This means that air conditioning and heating needs to be used to a far lesser extent, and CO2 emissions are again cut down.

Related:   How to Create a Healthy Garden on Your Balcony 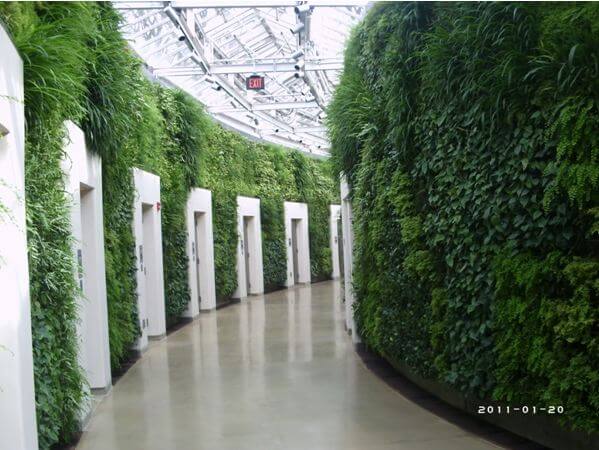 One of the main reasons for flooding in urbanised areas is the huge amount of impermeable materials used in every city – so if a large rainstorm hits, the water has nowhere to go but down drains that often become overwhelmed with the sheer volume of water. Increasing vegetation in urban areas, as green walls do exceptionally efficiently, will help absorb the runoff from roofs and overflowing guttering, lessening the effect.

An experienced installer of green walls will give the option for the foliage to be watered by a self-contained irrigation system that will collect and utilise rainwater to hydrate the wall, using a system predominately powered by gravity which is incredibly water and energy efficient.

Green walls won’t save the world on their own, but installing them on lots of buildings can have a significant impact on many aspects of global warming. As if that’s not enough reason to get one today, they can also help gain buildings’ LEED certification, which can result in tax exemptions.

And hey, who’s complaining if they look stunning as well! 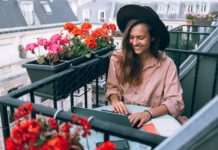 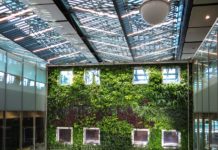 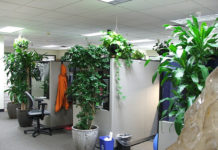 Best Plants For An Office Environment

Best Plants For An Office Environment