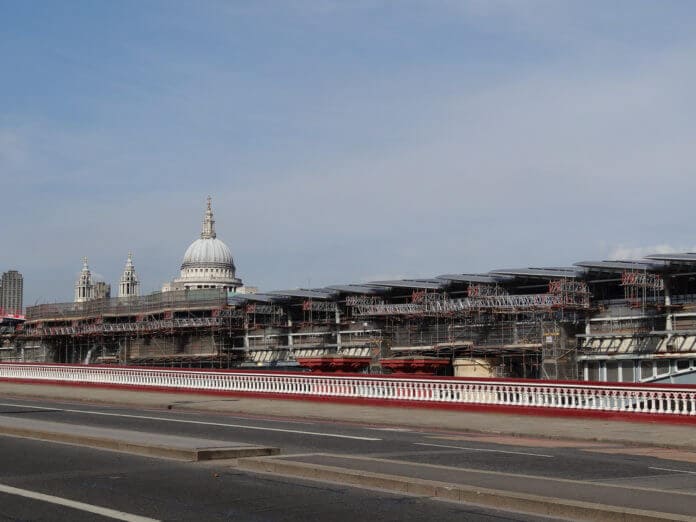 Blackfriars Bridge is a 923 foot structure that crosses the River Thames in central London. The bridge took over 9 years to build and was opened to the public in 1769. However, in 2009 work began on redeveloping the bridge to incorporate Blackfriars railway station.

Once completed, the station would be the first to exist over the Thames. Part of the redevelopment includes installing photovoltaic (PV) solar panels on to the top of the station and bridge. In this article we will look more closely at this design feature. We will discuss what form the solar technology will take and what it hopes to achieve.

Over 4,000 solar panels will be installed on the roof of the railway station that forms part of the Blackfriars Bridge. The solar panels cover an area of over 6,000 square metres. The work is due to be completed by the end of this year (2012) and once it is finished, the bridge will become the biggest solar structure in the capital.

Why Use Solar Panels?

The decision to use solar panels on the bridge was taken to promote and encourage renewable energy in London and reduce the carbon emissions of Network Rail. Promoters argue that Blackfriars Bridge is one of the most iconic images of London and people will be inspired by the solar technology the development is using.

There is also a strong environmental factor as to why solar panels have been chosen. Network rail is aiming to reduce the carbon emissions of every kilometre a passenger travels by 25% by 2020. The British company responsible for the installation of the solar panels on the bridge, Solarcentury, claim that the solar panels will generate around 900,000 kWh of electricity a year.

This amounts to half the energy the station uses on an annual basis and will reduce carbon emissions from the station by over 500 tonnes.

How Will the Panels Work?

The panels will work in an identical way to those used in standard domestic properties. The bridge is in an ideal location for the panels because it receives sun all day (well at least when itís not raining). Furthermore, with it being built over the Thames, it is not blocked by any nearby buildings or trees.

Energy found in sunlight will react with the materials used in the panels to create an electric current. This electric current will be multiplied across the thousands of other cells and then will be able to flow among them. This solar electricity can then be used to power the station.

Where did the Idea Originate?

The idea is not a new one, but Blackfriars Bridge will become only the second solar bridge in the world. The Kurilpa footbridge, which opened in October 2009 in Brisbane, Australia, was the first. However, the scale and ambition of the Blackfriars project makes it unique.

The Future of Blackfriars Bridge

The designers of the Blackfriars development hope that it will become a role model for future rail stations. As already stated, Network Rail has a target to reduce its carbon footprint significantly in just 8 years time.

If Blackfriars Bridge does act as a catalyst for similar designs, the possibilities seem endless. After all, there are over 100 bridges which cross the River Thames and even if a small proportion of these had PV solar panels installed on them, the capital’s carbon emissions and dependence of fossil fuels would drop dramatically.