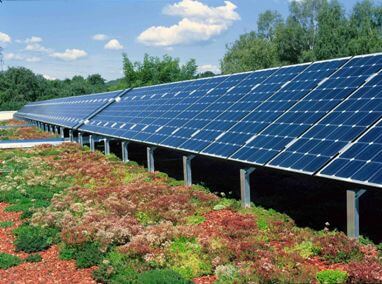 Both green roofs and solar panels have many significant benefits on their own. One study indicated that green roofs could reduce the yearly energy consumption of a building by as much as 6% through lowering the demand for cooling during warm summer days.

Putting vegetation on top of your roof would also help with filtrating away pollution in much the same way an indoor plant freshens up indoor air.  In addition to this, green roofs provide extra protection from water and weather damage, which likely adds many more years to the roof.

What most people are unaware of is the “evaporation-effect” plants have on nearby air, which provide a cooler microclimate where solar cells perform better. Solar panels are not necessarily most efficient at places where solar insulation (strength of sunlight) is at it’s highest since ambient temperature has a significant impact on the photoelectric effect. Plants and vegetation could also benefit from a little extra shading that solar panels could provide them.

Researches from Bronx Design and Construction Academy are currently experimenting with smaller-scale green roofs and solar panel systems in order to figure out how much of a synergistic effect there really is.

According to their current data, solar panels yield as much as 3% higher efficiency rates if they are placed on top of green roofs.

If the solar panel and green roof combo took off and more buildings started incorporating these technologies, it’s not that unlikely that the cost of solar panels would go down. This in turn could potentially lead to more people investing in them.