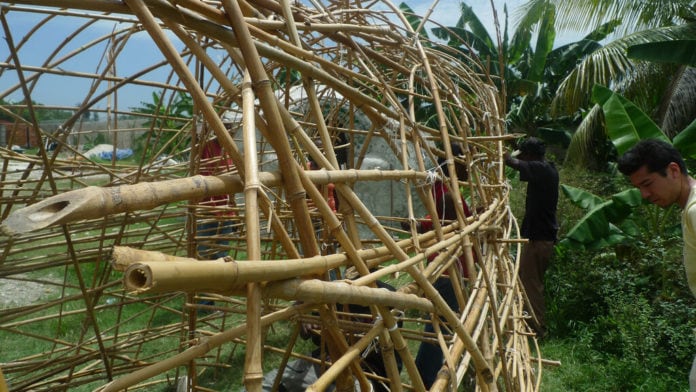 Many remember the 7.0 earthquake that ravaged the small Caribbean country of Haiti back in 2010.  Over one million people lost their homes because of the giant quake, and another 300,000 lost their lives.  When an astonishing 9.5 metered earthquake hit Chile a few months later, however, only 500 people died.  While extremely tragic, this unfortunate comparison left many to wonder why Haiti was so adversely affected by the earthquake.

Further research has shown that the construction choices made by a poverty stricken population led to the unsafe housing and their consequent collapse.  In a country facing massive deforestation, the poor have turned to the financially efficient route of using concrete and cement for buildings. While somewhat stable, concrete is comparatively weak to perpendicular forces and does not flex without cracking.  When the earthquake came along, the buildings didn’t stand a chance.

The short term plan aims to utilize currently available resources in Haiti, and combine them with bamboo to develop a low-cost system for building these structures.  In dealing with a high rate of illiteracy among the labor force, the techniques would need to be taught in a way concise and simple enough to be re-taught across the nation.

Related:
The Top 5 Green Materials for Home Improvement and Decoration

The long term goal would be to familiarize Haitian locals with the principles and benefits of bamboo so as to engender its growth across the country.  Bamboo would amply provide many economic as well as environmental benefits.  While trying to combat deforestation, planting bamboo on a large scale within the country would provide numerous local benefits.  Bamboo could effectively be planted, harvested, and re-harvested over twenty times while waiting for a forest of trees to reach maturity once.  Bamboo is widely known to be the fastest growing plant on the planet, but it is also heralded as an exemplary material for construction.  Its resiliency in retaining adequate strength while being able to bend and flex make it ideal for combating intense winds and forces from hurricanes and earthquakes.  The design of the Lakou courtyard houses only enhances these benefits.  Bamboo can be grown at a reduced cost when compared to other crops – it requires no pesticides or herbicides, and uses a very average amount of water.  Bamboo sees no risks from termites or other insects.  Many species can grow up to a few feet per day, and many can reach maturity in as little as 2-3 years.

In addition to the use of bamboo in local construction, the availability of this resource would bolster the Haitian economy in other ways.  Bamboo is currently in high demand in the United States in all its forms.  From bamboo organic blankets to bamboo hardwood flooring, Americans are presently obsessed with this eco-friendly resource.  The largest number of bamboo product imports to the United States is currently coming from China.  Since Haiti is a part of the Caribbean Basin Initiative, (CBI) it is entitled to many tariff breaks that would make their products more valuable to American companies.  The demand for Haitian bamboo textiles and other products would be instantaneous and would provide many jobs to Haitians.

It remains to be seen how quickly this rebuilding strategy will be employed in the country of Haiti.  But when it is, Haiti will be a shining example of the benefits of environmentally friendly tactics used on a large scale.